I used to play snakes and ladders with my family when I was a child. Being the youngest of three boys, it was one of the few games that levelled us all out. Winning tactics couldn’t really be deployed and experience mattered little in determining the final result… 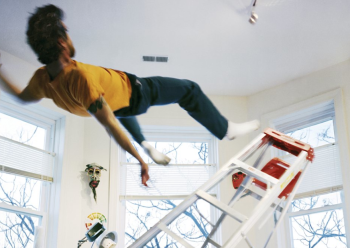 I remember it being an addictive yet frustrating game – one the would often put the finish line right in sight only to leave many a hopeful player crashing back down to the beginning again. It could be both thrilling and disappointing, fortuitous and cruel; a simple roll of a dice would determine whether a player was victorious or vanquished.

As reductive as this may sound, it recently occurred to me that it’s a game that, perhaps more than most, teaches its players about real life.

In recent weeks, a number of people, who have only very recently lost their partners, have made contact with me. The intensity of their pain has been both palpable and unimaginable (after all, even having ‘been there’ myself, sharing only the experience of bereavement could never bring an outsider close to the depth and breadth of personal emotion a bereft individual will feel). When someone does get in touch, though, I find it impossible not to reflect on what it felt like for me in those early days, weeks and months. Perhaps I hope I can provide a little empathy, or maybe there’s something altogether more selfish – if only subconsciously – at play. Maybe it allows me to reflect on my own progress; maybe it allows me to keep check of whether I’m climbing a ladder or stumbling down a snake.

When my wife died in November 2012, I found myself desperate for answers:

How would I survive without her?

How would I get through the pain?

When would it stop?

How on earth were the other poor widowed souls, who were contacting me to say things would get better, actually managing to make positive steps forward?

I suppose back then it wasn’t just a matter of when would it stop, but how could it stop?

I’ve since realised that things aren’t as black and white as they once seemed. Life, for example, can end as abruptly as it begins, but living – the bit in between the start and the finish – is far less determinable. And I think grief can be much the same. Just like the aches that are left in the wake of a serious physical injury, the mental pain of grief tends to lessen rather than entirely stop. Scars are left, the intensity ebbs and flows, and sudden memories of traumas past can have different effects on the body and mind.

Some days a memory of the person lost can be welcome and comforting.

Perhaps I’ve been climbing a ladder without even realising I’d mounted the first step.

But then other days the memories can drag us back down.

How can the person I love be gone?

How is it possible that they now exist in memory alone?

How can I suddenly feel so bad again when I thought I was doing so well?

How discombobulating that a such an acute crash could suddenly follow what had felt like such a steady and relieving sense of ascension.

And yet in snakes and ladders, a player must roll the dice and make a move to be in the game. Progress starts at the beginning of the journey and yet regression is just a slight and unpredictable step away.

One particular person who made contact with me this week stuck out in my mind. Having only just lost her partner, she effectively said that she would do anything to feel not great but just okay. The game of snakes and ladders came into my mind for the first time since I was a child at this very point.

But if I was winning, how could ‘doing okay’ possibly be okay?

Doesn’t progress need to be constant to indeed count as progression?

I think not. I think that gameplay teaches us that setbacks are as vital as success and that the longer the ladder, the deeper the fall. And maybe the pain of loss, however broad and deep it may be, can be summed up by a board game basic enough for a child to play.

You rise and you fall. You win and you lose. You’re never so experienced that you won’t experience setbacks again. You’ll never truly be able to predict your path from your first move. And yet each move is a crucial step towards something that can probably best be described not as winning but as hope.

Loss: how simple a concept to grasp and yet how difficult a construct to grapple.

I’ve heard it said that you should never read your own reviews. Having never written anything that was subject to public critique before I wrote my first book, however, I just couldn’t help myself. In sharing my story and opening up about grief, I’d set out to help...