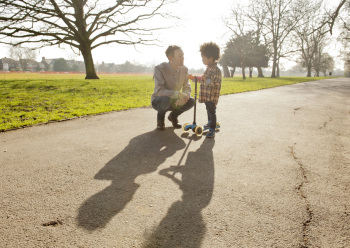 Life rarely goes exactly to plan. When I was young there was a time when I really thought that I wanted to be a bin man because I loved the colour yellow.

I’d gaze out of the window of my grandma’s first floor flat at the refuse collectors’ high visibility jackets and think. That could be me one day.

Then I started school and my plan took a change of direction. My once sartorial ambitions (I had no real interest in waste management as such) turned historical; I just couldn’t get enough of dead kings and queens, mummified corpses and monuments built to honour or house the deceased. I binned the idea of cleaning the streets and dug out a trowel; I decided that the only option for me was to become an archaeologist.

Unlike my desire to illuminate my life through fluorescent colours, my passion for history never became a thing of the past. To this day I’m rarely more content than when surrounded by rubble and ruins. And yet the plan changed again and I left another ambition unfulfilled. Once more it became apparent that apparel would play a disproportionately significant role in my final career choice.

‘I’ve decided I can’t be an archaeologist after all,’ I explained to my parents, ‘I look ridiculous in tank tops and from the research I’ve done they appear to be compulsory.’ Oddly, for someone who ended up with pretty average A-level grades, having to have an Oxbridge degree didn’t seem to factor as the major barrier to my potential success.

I turned to my teachers for their guidance on my next step but found myself disappointed in the careers advice offered – it came from all the wrong people and focussed on all the wrong things. Rather than being built around what I wanted from life, it was all about what subjects I could pass as at teenager and how they could be applied to the limited pool of roles that careers advisors knew anything about back then. A list of job titles I had no interest in emerged with none of the detail that really mattered: how much money I might earn, how hard I was likely to have to work or God-awful the experience might be, how likely it’d be that I’d feel fulfilled, whether my personality (and not just grades) would fit, whether I’d have time to see friends and start a family, or even what clothes I might have to wear. How was I meant to know what to do without that detail?

When I turned my attention to PR at sixteen, not one of the careers advisors I spoke to knew the first thing about it. But since I did in fact appear to a member of the public and had experienced ‘relations’, when the school bell rang – signalling the availability of tea and cake in the staff room – my teacher gave me her stamp of approval and made a sharp exit.

Whatever! I’m only doing it so I don’t have to wear a suit for work, I thought.

Although I made up my own mind about my future, I now find myself wondering how my teachers might have reacted if I’d stuck with my original impulsive desire to simply wear yellow. Depending on the person dishing out the advice, my brief could have seen them point me towards refuse collection (my first choice), artistic pursuits (‘He sees the world so differently,’ I imagine them saying. ‘What a guy!’) or – and more likely – the door. ‘You’re nothing but an obtuse, time-wasting teenager,’ I hear them cry, ‘and you don’t appear to understand the importance of early-life decisions.’

John Lennon famously once said, ‘When I was five years old, my mother always told me that happiness was the key to life. When I went to school, they asked me what I wanted to be when I grew up. I wrote down ‘happy’. They told me I didn’t understand the assignment, and I told them they didn’t understand life.’

Perhaps we can change direction, though. Maybe, in the moments when we find ourselves with the energy and clarity of thought we need, we can take time to learn lessons from life; we can take a moment to consider what’s really going on.

I’ve done a lot of thinking lately and I’ve acknowledged that my life will never be the same as it once was. It’s become clear to me that I will waste what precious time I have on earth if I spend all of it trying to be the same sort of happy that I once was. I’ve experienced (and still do experience) such agony that I now accept that pain will always have a role in my life. Naivety has gone, innocence is lost, assumptions are out the window, and my juvenile expectations of privileged life are a thing of the past. In short, my life hasn’t gone to plan.

So, from now on my plan is not to have a one. I’m going to take the pressure off myself by pursuing more than just happiness. My goal now is to have an interesting life, instead. I’ve realised that if I get bored I can do something about it, but I don’t buy into the marginalising idea of simply ‘thinking myself happy’. I now know my own mind well enough to understand that I cannot contrive contentment.

This change of direction means that I’m going to work with life and not against it, because, honestly, isn’t life naturally more interesting than it is happy, anyway? I believe that it’ll be opportunity, not joy, that knocks.

From today I can call myself an author if I wish. A book I’ve written in fertile response to the void left by my wife’s futile death has now been published. It was never part of the plan, though. I had no aspirations of being a writer (I hadn’t even bothered to explore what they wore), and yet suddenly I officially am one.

Before my wife died I thought I was officially complete, but now I realise that perhaps no one ever truly is. And if we ever were, I think that human nature dictates that we’d probably still want more, anyway.

So I could call myself a PR consultant, a writer, a blogger, an author or a freelance journalist. I could label myself as ‘occasionally happy’ or ‘frequently sad’. I could aim to one day be ‘complete’ or accept that being a work in progress might make my life more compelling and my ambitions more attainable.

Whatever the case, right now I only care about one label and that’s ‘Daddy’. Whatever else life has to offer can make its way to me because I’m too exhausted to keep chasing it down. There will be lots of emotions felt along the way, but I’m pretty sure I’ll be less disappointed with whatever happens next in my life if I strive to make it stimulating and stop being so hung up about attempting to go through life in a state of constant happiness. After all, who really does anyway?