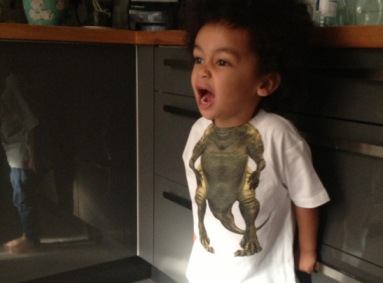 My son’s behaviour has taken a nosedive. He’s angry. He’s suddenly become all-too-frequently furious and ferocious. Not having the right lid for a pan or the exact piece of Lego he ‘needs’ is an affront that more often than not leaves him incensed and completely enraged. If I were watching a child behave the way he does on Supernanny I’m quite sure I’d have to switch off out of pity for the parents.

I can’t turn my son’s channel over though. I made a promise to myself some time ago that I was going to try to see what most call tantrums as an outlet for his own grief. This is almost impossible but I try. Like most toddlers, Jackson is happy the vast majority of the time, or at least he appears to be. But when he tips over the edge, it’s almost too painful to watch. His ‘tantrums’ are more fierce than I have ever seen on any other child before and they always end up in my son screaming for his mum. No one who is still available to care for him will suffice. Only patience, love and understanding see him through and eventually return him back to the happy child he mostly seems to be. I’ve realised that I will need a lifetime of patience too because his reaction to my wife’s death is never going to go away. Sure, I expect it to change, move, shift and evolve, but why try to convince myself that this all has a happy ending?

I think the reality pill that I took months ago may be tougher for others to swallow. But what would really help me right now is for someone to be able to relate to the situation, to empathise, to try to understand and perhaps to offer me a little advice. Instead all I hear is: ‘It’s his age’; ‘They all go through this’; ‘You just need to be firm with him’; ‘It’s really nothing to worry about’; ‘He’s no different to other kids’. But he is, isn’t he? He’s the only two-year-old I know who’s already lost a parent and, at least in my mind, it goes without saying that his loss has had an impact on his behaviour, on his ability to feel like the world’s a safe place, and on his capacity to trust that those around him who are still here won’t suddenly disappear. And yet I face more platitudes; more serious issues brushed conveniently under an inconvenient carpet of grief.

I guess people are just trying to relate and to be kind. But I’ve never been one to think that a problem will go away by ignoring it. If others could see that I’d left him with a physical ailment unchecked, I’m sure social workers would be at my door. But when the impairment is psychological it’s all too easy to pretend that’s it’s not happening. Or, worse still, that it’s a sign of weakness to get it checked.