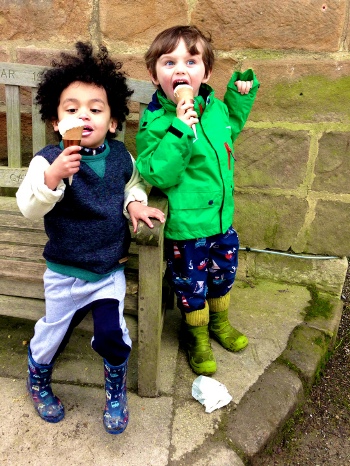 Around this time last year I went on holiday with my best friends and Jackson. It didn’t go too well. I’m not sure why I thought that a week in the sun would make us feel better only three months after my wife had been killed, but then what else do you do? Sit at home and wait in vain for a fairy godmother to come along and make everything better?

At the time I just felt like I needed to do something – anything – to try to relieve the pain. Sadly, it had the opposite effect; I came back feeling worse than I did when I left. Anything that could go wrong did and it’s a time in our lives that we now speak about rarely. The Spanish words ‘Gran Canaria’ have become as loaded in our social circle as the Scottish name ‘Macbeth’ is in the theatre.

Back then I felt like the world was against me; things seemed to go wrong every single day. I couldn’t seem to leave the house without either my son or I incurring an injury, be it physical or emotional. And no matter where I was or with whom, there was only ever one response: to curse the heavens, to scoop Jackson under my arm, to storm home in a fit of grief and rage, and to hit the bottle.

One such event that particularly sticks in my mind happened on a day soon after Desreen died when I took Jackson to meet some friends in the park near our house. There were lots of people in the playground: friends, strangers and, just by chance, a number of parents of children from Jackson’s nursery. Looking back I think I was desperate for everyone to see me coping well – not as a bereaved husband but as a father to my son. Just minutes after arriving, Jackson was lying face down in a muddy puddle, soaked to the skin, filthy, freezing and completely distressed. I wanted the ground to open up and swallow me whole. I even remember calling a friend to ask if he knew whether a person suffering a nervous breakdown is actually aware of what is happening to them. When I felt so consistently close to the edge, how would I know if I was about to tip over?

I’ve spent much of the last year feeling that way, too. And when I’ve been complacent enough to think that I’ve been tested to my absolute limit, I’ve caught chicken pox, suffered from a virus that I seem unable to shift and the roof of my house has fallen in and wrecked my bedroom ceiling. Put coarsely, it has been pretty ******* ****.

I find it’s helpful to my own mental wellbeing, however, to recognise when things are going okay. As chance would have it, this weekend Jackson and I are with some of the same friends we went on ‘the Spanish holiday’ with this time last year. This afternoon we took our boys out for some fresh air in a country garden. With just one year between them, Jackson and his little mate Albie adore each other; best friends for the next generation with dads who have been best friends for a generation.

They were having such a great time together racing around outside until Jackson suddenly lost his footing, caught his Wellington boot in the mud and, just like that previous time in the park, was left soiled and saturated. After changing him into the spare outfit I was carrying in my bag, and graciously thanking my friend, Lee, for Jackson’s recovery ice cream, he fell again. This time he was safe and dry but his ice cream was history. The tears that came were so intense that his jacket-in-waiting grew nearly as wet as its puddle-sodden predecessor. But you know what? I was totally chilled out. I smiled and, after making sure that my son was okay, I cracked a joke. I even turned to my friends and asked them if they had noticed that I wasn’t on the edge. For the first time in as long as I could remember I was just a dad whose child had fallen in a puddle and a guy whose son had dropped an ice cream on a path. Nothing more, nothing less. And these days I want little more from life than that.