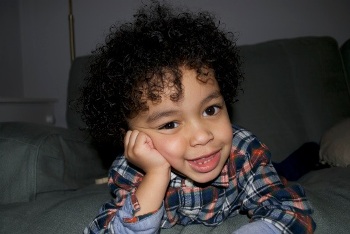 I’ve felt a great degree of tension about how to best raise my son since my wife was killed.

Immediately after her death I did my very best to act happy in front of Jackson during the day and then later retreat to my room to grieve honestly and alone. He was only two years old at the time but he was never daft; Jackson was aware of the change in me from the night his mum disappeared.

For months afterwards our relationship was challenging. When I felt at my lowest he was often at his most buoyant; when I felt okay his mood and behaviour clashed with mine and brought me back down. I think we both found it hard to deal with the fact that we weren’t always able to provide each other with a substantial enough dose of happiness to take away the pain of such intense grief. But I made a decision to be honest about my feelings with my son. I kept hearing stories about how children who had lost their mothers at an early age weren’t allowed to talk about them again in case they upset their fathers. I realised that I wanted to raise a child who understands that it’s okay to express his feelings, and that for me to hide mine would probably only end up demonising his.

Thankfully I am able to say that things have softened a little, lately. I suppose that through the struggles I’ve experienced in coming to terms with losing Desreen, the time I’ve taken off work, and my constant analysis of Jackson’s behaviour, I have probably become a better parent. I’m more patient, attentive and happy to admit when I’m the one in the wrong. It took me some time to realise that when he got the worst of me, I got the worst of him. Just today I noticed how much he retreated when I told him off for something that wasn’t really his fault (let’s just say he could have given me a little more warning before he did what he needed to do). I’m having a bad weekend because of a good night out on Friday – an all-too-frequent emotional response that hits me every time I try to enjoy myself, leaving me wondering whether I’d be better off boarding up my front door and living life as a hermit. When I saw Jackson’s reaction to my stern words – his back turned, his eyes refusing to meet mine, and his lips pouting deliberately and comedicaly – I knew it was time for me to apologise and when I did we were quickly friends again.

When Desreen was alive she often used to get asked what was wrong because she had a habit of contorting her face in such a manner that gave the impression that she was cross. I knew there was nothing the matter with her at all, but when people quizzed her about her mood it was then that she would get mad. ‘This is just my face!’ she would exclaim in a tone that only served to justify the enquirer’s concerns. Well I’ve thought of that face all weekend because of something that Jackson keeps saying to me.

‘What’s wrong, Jack-Jack?’ I’ve asked him several times as he has appeared to retreat from me. ‘Daddy’s not got a smiley face,’ he keeps replying, sadly.

And he’s right, Daddy’s not got a smiley face. But what’s a man supposed to do? I suppose I could ‘put on a brave face’. I guess I could ‘be strong’. Lying about how I feel is an option, too. I think there’s tension in all of the decisions we make about raising our children alone, just as there is evidently tension in my face. Perhaps in so conscientiously trying to build a happy life for my son and myself, Jackson notices more than most when his daddy seems sad. Maybe other kids say this to their parents all the time, too. It could be that I think too much and that if life hadn’t dealt me this hand I would dismiss his remarks as ‘funny’ or ‘cute’. But I suppose if I can take anything positive from his rather heartbreaking observation it would be that he’s not asking me why I am smiling. Thankfully he’s still familiar enough with that facial expression for it not to be his source of surprise, shock or even sorrow.