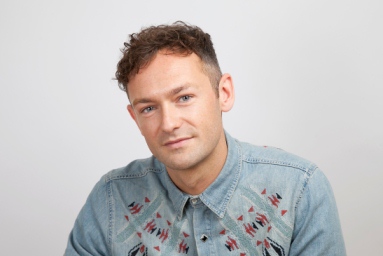 My publisher got in touch last week to ask me who they should credit for a head shot I provided some time ago when I was first invited to write my forthcoming book. I really couldn’t remember which photo I’d shared so I asked for it to be sent back to me. When I received it I saw a picture of myself from a year or two ago looking happy, healthy and young.

It was tempting to just send the photographer’s name for the credit and have done with it. Yet something about it felt wrong. The book I’m writing has sprung from a blog called Life as a Widower. The picture was from my happy-go-lucky life as a husband, father and all round contented 32-year-old. I just couldn’t imagine the cheerful eyes in the picture looking back at the reader from the inside sleeve of a book about the death of my wife.

So last week the original shot’s photographer, Dolly Clew, offered to re-shoot my portrait. She totally understood my thinking and agreed that it was probably the right thing to do. Having only met her once for about ten minutes, I was really touched that she offered to help. I’d only been in her flat for about 15 minutes before she had my life story and I made myself laugh thinking about the poor counsellor who I saw for a couple of sessions soon after Desreen died – she can’t have known what to do with a man who was quite so ready to open up. But I’ve worked on a number of photo shoots for clients in the past and I know that they usually work best when the subject they’re shooting doesn’t feel too uncomfortable or self conscious and when there’s a bit of a rapport established.

Dolly usually shoots cage fighters. In fact, the first time we met, in a sterile and boxy office room in the West End, I asked her if she specialised in portraiture and she laughed. It turned out I had a little less testosterone and was wearing a touch more clothing than most of the guys she usually photographs. I even surprised myself with my own knowledge of mixed martial arts when I started talking about someone I suspected we both might know. I say ‘know’ but I really mean a friend of a friend’s brother who actually is a cage fighter. ‘Small world’, we agreed, both quite shocked – and there was the ice broken and the rapport established.

On Monday, however, I felt less comfortable than the time before: fidgety because I didn’t know how to stand, awkward because I didn’t know what to do with my face. Last time round we got the shot we needed for a company website in about five minutes. This time it took much longer. Dolly showed me some of the pictures she’d taken and I could see the problem immediately.

She pointed out that I needed to try to smile with my eyes and not just my mouth. She suggested that I think of something that could make me feel genuinely happy because that would shine through.

I’ve never really trusted people who don’t smile with their eyes. I have this thing about looking round a room after I’ve heard someone laugh to see if I can spot who the laughter came from once the sound has already faded. If everyone looks stony-faced I suspect someone was faking it. Jackson’s amazing at putting it on. I’ve got a video of him laughing at my friend and his son chatting on holiday but the fake chuckle dissolves from his face as quickly as it appeared. He just returns to eating his bowl of spaghetti with a scowl. Before Desreen died, his ability to fake it used to really make me laugh but now it worries me that I might never really know how he feels.

‘Me?’ he asks back, even if there’s no one else in the room and as though I’m usually given to asking myself such a question. ‘Oh, I’m happy, Daddy’, he’ll say leaving me still wondering about how he really feels.

In the end I got my eyes to smile by thinking about my son. That morning he invited me to ‘play trains’ and I’d willingly joined in. Stupidly I touched James instead of Hank. Even more stupidly I took James on a little detour through a tunnel (one of the kitchen chairs) without His Royal Highness voicing the command.

‘NO DADDY!’ shouted Prince Jackson, ‘Be Hank. And don’t use that hand, use this one. And don’t go in the tunnel. And follow me. Not that way!’

‘Right that’s it’, I asserted, ‘I’m going on strike. You’re like some middle eastern dictator and I’m not taking any commands from you anymore. And don’t come near me either because this area around me is a picket line.’

He just looked at me like I was an idiot and turned his attention to dancing to the Arctic Monkeys new single, which was playing on the radio.

He’d given me a lot of new material to help make my eyes smile that day. And, during the shoot on Monday afternoon, I realised that he always does.