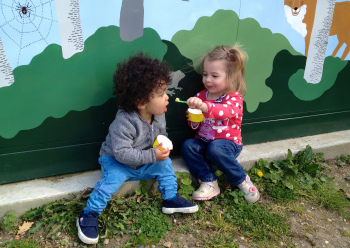 I took my little boy out for a walk this afternoon and ended up in the local library in an attempt to warm up after discovering that it was freezing outside. I invited him to choose a book for me to read to him, but instead he decided he was going to introduce himself to some of the other kids. Moments of interaction like this really pull at my heartstrings because there was a time last year when there was no way he would have even contemplated playing with anyone else in the room apart from me.

No sooner had he tried to befriend a little girl he had never met before than he had quickly ditched her in favour of someone altogether more familiar – his best friend Annalise walked into the room and completely stole his attention. Annalise is the eldest daughter of my wife’s best friend, Marianne. Jackson has known this little girl from the moment he was born and has attended the same nursery as her since he was ten months old.

As Jackson and Annalise set about disrupting all the parents and children who sat reading quietly in the children’s room, I spoke to Marianne about how I had been observing his behaviour and how moved I was to see that he seemed increasingly comfortable with the idea of making new friends. Marianne has another little girl, Lucia, who was born just a week before Desreen was killed. As she showed off her newly walking legs, which kept her mummy on her toes, I sat back and watched Jackson and Annalise play.

They really are something to behold: Annalise is the gentle boss and Jackson the slightly aggressive second-in-command; they are like sister and brother in how they play; while Jackson refuses to allow anyone to show much affection towards him, he could neither enter nor leave a room where he knew Annalise resided without giving or receiving a kiss or an embrace. They quite simply love each other.

Over the last few months this has become the subject of much amusement amongst our friends and families. Were they both girls we would all be saying that the beautiful relationship was inevitable, that they were the next generation’s once inseparable Des and Maz. The fact that they are not somehow makes their bond even more special and entertaining to observe – like their mums’ friendship was so strong that it was destined to be passed down to their kids no matter their sex.

Their unique affection for one another has always made me laugh. I often send both Marianne and her husband, my friend Olly, text messages to let them know what they did to amuse when I picked Jackson up from nursery that day. Today, however, I felt differently. When we said goodbye one another, almost having to prize Jackson and Annalise and their locked lips apart, I felt tears fill my eyes. I thought about how Desreen should be there with her friend to witness this special friendship unfold. But it wasn’t just that thought that made me feel emotional.

I’ve spent this week intermittently proof reading the book I wrote in the year that immediately followed Desreen’s death. It has brought back lots of memories that I had all but forgotten. It has reminded me just how much I worried about my son’s wellbeing and how I looked to other adults for solutions to all of the problems he went through as a result of his grief and the confusion surrounding the abrupt disappearance of his mum.

Then all of a sudden I was in a room with his best friend: a little girl who is yet to turn four years old. I pictured how she would greet him at the nursery door every single day with a hug when he seemed too upset, distressed, confused or angry to want to enter the room with the other kids. I realised just how much she cared and just how little credit I had given to this little girl he would have so struggled to get through the last hideous fourteen months without. Just as I couldn’t imagine having gone through this ordeal without my closest friends, it occurred to me how much he too has needed his. I just know that few things would have made Desreen happier than seeing her best friend’s little girl taking such good care of her best little boy.