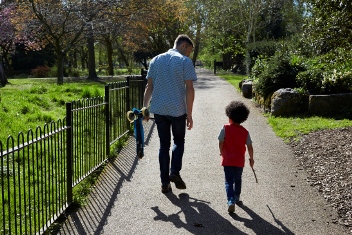 In July last year I decided to leave my job to be with my son.

Actually, I’ll correct myself, I think it would be fair to say that life made that decision for me. I was in a lot of pain following the sudden death of my wife, and our son was upset, angry and confused about where she’d gone. Back then it felt like there was no other choice; I couldn’t imagine another time in Jackson’s life when he would need me more. For me, it wasn’t so much the right thing to do as the only thing that could be done to try to begin to rebuild our lives.

I’m generally pretty hard on myself, though. Looking back over the last eighteen months has made me realise that I’m prone to making anxiety-fuelled, insecurity-masking, self-deprecatory comments, too. ‘What are you doing with yourself now?’ people would ask once I’d left work, to which, depending on my audience, I tended to reply, ‘**** all,’ or, ‘I’ve taken early retirement.’ Either way, I answered with a smile of apparent self-satisfaction. I was dying inside, though. My life had been torn apart and my career appeared to be in tatters, too. I couldn’t function the way I knew I needed to in order to feel good about myself. And nothing was able to make me feel good about myself, either – perhaps especially not the stupid comments that kept spilling from my out-of-control mouth, which trailed wasted words with the nauseating sound of my own fake laughter.

I suppose those flippant remarks may have been my way of trivialising the task in hand in an attempt to make it feel less excruciatingly challenging. I needed to try to mend the cracks that I could see in a little boy who could barely articulate how he felt, all the while dealing with my own loss, grief and the seemingly incessant bouts of illness caused by the unfamiliar slow-sinking feeling of depression. It seems absurd that I would dismiss this endeavour as ‘nothing’ when I now understand that it was in fact everything.

On top of taking on what I have since come to appreciate was everything to me, I took on a little more, too. I wrote a blog and a book; I bought and decorated a house; I faced all the anniversaries, which newly bereaved people often come to dread in that first year; and I trained for and ran a marathon. Essentially, I did everything I could to keep myself sane and healthy for my son and myself. I would later come to realise that I inadvertently created one to the most fertile phases of my life as a way of filling the enormous void in my life left by the death of my wife.

Looking back, I believe that this prolific period was what I needed at the time. Right now, however, I can’t escape the feeling that it has taken its toll. I feel exhausted and overwhelmed, and all too frequently frustrated and irritable about next to nothing. I now know that it’s time for a proper break.

‘I can’t help but feel bad that I took six months out last year and yet I’m saying that I need another break already, though,’ I explained to my best mate the other day.

I laughed; his way of making things simple never fails to give me the clarity of thought that I often need.

And it really wasn’t fun; it was hellish. It wasn’t a break, either; it was gruelling in ways that my previous career of choice could never be. Having suddenly realised this, I’m now looking ahead at life knowing that I want to do everything I can to make my little boy – whom I can see growing up too quickly, perhaps because of the circumstances that have befallen his life – have more happy and playful times ahead. But I don’t think that I can give him those with the sincerity he deserves unless I make happiness and playfulness part of my life, too.

Right now that means I’m putting on my ‘out of office’ for the summer. I’m going to have some time off and create some space to just be. I’m going to play with my son more than I play with my phone and my laptop. I’m going to indulge in his wonderful observations about life, such as the moment he told me that the clouds were dancing as he gazed out the window of the high-speed train on which we were travelling earlier this week. I’m going to focus on living my life rather than documenting it. I’m going to start reading newspapers again and stop writing for them. I’m going to go on holiday with Jackson and spend more time with our family. I’m going to enjoy watching my friends getting married in the months ahead. I’m going to see what it feels like to have some proper time out for the first time in years. I’m going to find out if I can indeed begin to feel happy and playful again if I try to shift my focus from sorrow and sadness for a while.

Perhaps I’ll let you know how we get on after our summer sabbatical. Until then thanks for your incredible support, take care and goodbye for now.