14 year olds have sent more than 35,000 texts and racked up three weeks of video chat

By the age of 14 the average child will have sent more than 35,000 texts, 30,000 WhatsApp messages and racked up more than three solid weeks of video chat, a new study has revealed 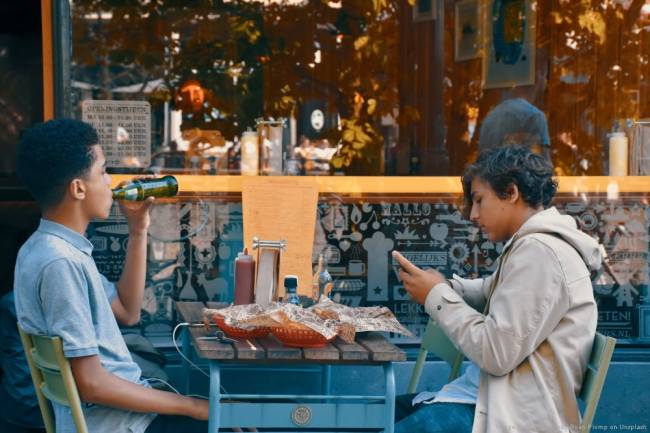 The modern youngster will also have spent the equivalent of six months looking at their phone during that period; averaging 135 minutes’ use a day.

The survey of 1,000 kids aged 8-14 and their parents, also found young people spend over an hour a day browsing social media sites like Facebook, Snapchat and Instagram

It also emerged they expect to receive a reply to a message within 15 minutes.

A spokesman for Monqi, makers of a new smartphone for kids who commissioned the research, said: “As the smartphone generation is relatively new, we’re not sure of the long-term effects of such heavy phone use.

“However parents need to take note of these figures and look at ways in which they can introduce healthy smart phone habits, to get the balance right between screen time and other activities, such as school work and family time.

“Monqi is a dedicated device for kids, with an app that parents can use remotely to control phone usage, including how much time they spend texting, playing games and using social media – it gives the kids independence but allows the grown-ups to introduce technology in a safe way.”

The study also found on average, kids receive their first smartphone at the age of 10.

Other stats from the results revealed six in ten under-14s said their phone is the first thing they check in the morning and last thing at night.

Young respondents said the best thing about their smartphones was being able to stay in contact with friends and family, and playing games.

The most common argument kids have with parents about mobile phones is the amount of time spent using it, followed by the times it’s used – either too early in the morning or late at night.

It seems that kids may inherit some of their smartphone addiction from their parents.

Of the adults polled in the same survey, nearly four in 10 said they themselves spend too long each day looking at their smartphone.

And they spend an average of 124 minutes a day staring at their screens – just ten minutes less than their offspring.

Almost half of parents think their children spend too much time on their smartphones each day, and one third say they try to set times that phones aren’t allowed to be used.

Two thirds also admitted to reading the messages on their child’s phone, and 80 per cent think that kids are more at risk from predators today than in the past, due to their phones.

However, three quarters of parents are happy for their children to have phones that allow them to call for help in an emergency, and 62 per cent think staying in touch with family members is worth the arguments.

Psychologist Dr Becky Spelman commented on the findings: “The survey found that children invest a great amount of importance in the ability to stay connected – checking their smartphones before bed and as soon as they wake in the morning.

“Some parents may be alarmed by this, comparing their children’s experiences to their own childhood when technology was not as prevalent.

“Panic is not the solution, nor is denial. It is inevitable that your child will use technology, so it’s your job to help them navigate the digital waters safely, and set boundaries.

“The survey also found that there are benefits to kids having a smartphone – parents can track their child’s location and have peace of mind knowing that they can be contacted if a problem arises.

“This gives the youngster a new found independence – which is so important in an age of cotton-wool-parenting.”

THE TOP 10 SMARTPHONE WORRIES FOR PARENTS