GIRL, 7, ‘OVER THE MOON’ AS GOOGLE CHIEF REPLIES TO JOB APPLICATION 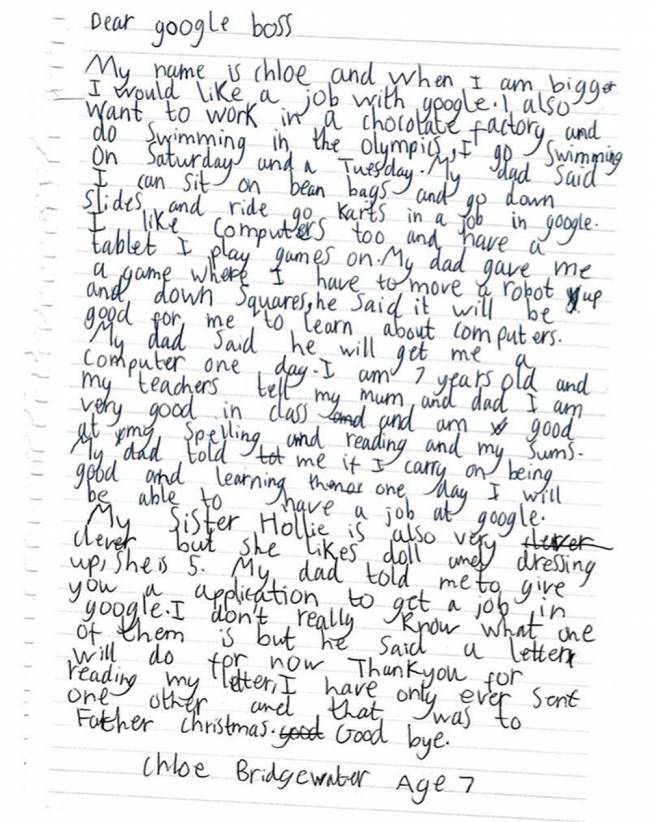 Chloe Bridgewater, from Hereford, sent the letter to the technology giant’s head offices in Silicon Valley in the US last Monday, saying: “My dad said I can sit on bean bags and go down slides and ride go karts in a job in (Google).”

Her father, Andy Bridgewater, 37, said she was “over the moon” when the head of the company responded just four days later, encouraging her to “keep working hard” and get in touch when she finishes school.

Mr Bridgewater, a sales manager, told the Press Association he was working from home when Chloe asked him where he would really like to work.

“I said Google would be a nice place to work, then I told her about the bean bags and the driverless cars. She responded by saying she would like to work there.”

He told Chloe she should “get the ball rolling” and send Google an application.

“I had to explain to her what an application was,” he said.

In the letter, Chloe wrote about her skills and interest in working for the company one day, and highlighted her experience in tablet usage and robot games.

And she wrote: “My dad told me to give you (an) application to get a job in Google. I don’t really know what one of them is but he said a letter would do for now.

“Thank you for reading my letter, I have only ever sent one other and that was to Father Christmas. Good bye,” she concluded.

Mr Bridgewater said he was “overwhelmed” when he got home a few days later and saw the envelope on the floor with the Google logo on it. 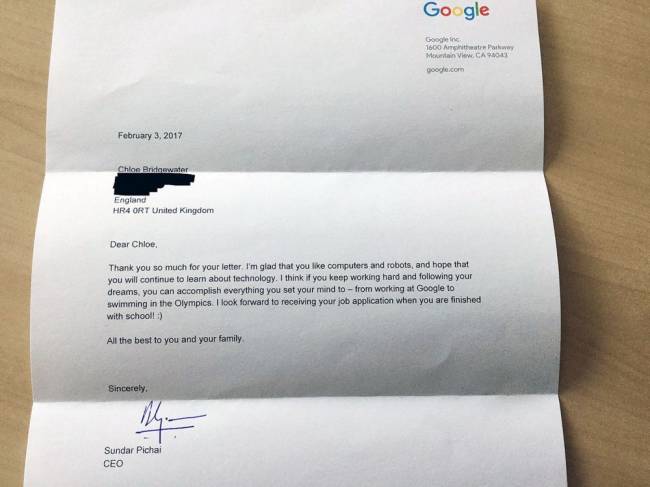 In his reply to the primary school pupil, Mr Pichai – one of the highest-paid chief executives in the world – told her: “I think if you keep working hard and following your dreams, you can accomplish everything you set your mind to.

“I look forward to receiving your job application when you finish school.”

The letter went viral after Mr Bridgewater posted it on LinkedIn – gaining more than 10 million views, and prompting phone calls from Japan, China and the United States.

He added: “My wife and I both want Chloe to be a little girl, if she wants to pursue her dreams we’re not gonna stop her.”