The parents of a young, terminally ill football mascot have been “overwhelmed” after his battle with cancer inspired support from across the globe, campaigners said 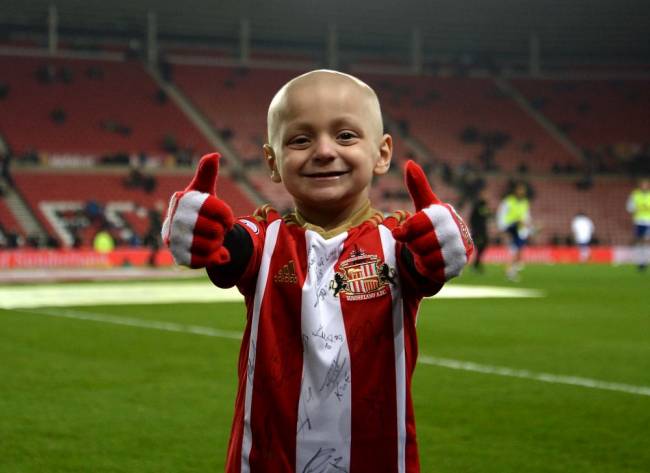 Bradley Lowery, five, from the village of Blackhall Colliery near Hartlepool, touched the world of football with several pre-match appearances for his beloved Sunderland FC.

But despite Everton FC, his team’s opponents for one of the games, pledging £200,000 towards a fund for his treatment in the US, his neuroblastoma has been confirmed by doctors as terminal.

Bradley’s mother Gemma said last week that further treatment will only prolong his life, despite a brief period of respite from the illness last year.

The youngster, whose cancer battle began in 2013, has been swamped with some 40,000 cards from well-wishers sending their love from as away as South Korea, charity group Red Dreams said.

Despite battling his debilitating illness, he managed to twice walk out with his team against Everton and Chelsea – even slotting a goal past the latter’s keeper, Asmir Begovic, before kick-off this week.

Lynn Murphy, the campaign manager for Bradley with Red Dreams, said Bradley’s family have been taken aback by the extent of public reaction.

She said: “We’re inundated, inundated with presents. Bradley’s got his own sorting line in the post office in Hartlepool because of the amount of presents.”

“He’s a cheeky chappy. He’s always got a smile on his face, it doesn’t matter how much pain he’s in, and obviously the family’s been overwhelmed by the amount of support they have had,” she added.

Ian McManus, who runs Red Dreams with his wife Dawn, said Bradley was his mother’s “little super hero, because he’s always smiling through everything he’s gone through”.

Mr McManus has now produced a charity single with local sisters Olivia Crawford, 15, and Georgia Fletcher, 22, in aid of the Bradley Lowery Foundation, which Bradley’s parents Gemma and Carl hope to set up in support of other sick children in the North East of England next year.

Mr McManus said the song was also about Bradley’s legacy: “All we tried to do with the song is give them some memories that they can cherish.”

The young cancer sufferer is expected to undergo another round of chemotherapy in 2017.