Parents to spend £468 entertaining their children this summer

With the summer holidays looming, parents across the UK are expecting to spend £468 on entertaining their children, according to the Post Office Money annual Parents’ Summer Spending report[1]

The costs associated with the summer break have decreased by 14 per cent compared with last year – although remain almost a fifth (17 per cent) higher than in 2012, when Post Office Money first conducted the research. With a third (33 per cent) of parents admitting they spent more than expected last summer, the anticipated fall in costs this year may suggest that many plan to keep a closer eye on their spending over the coming weeks.

With the recent heatwave sweeping the country many parents will already have kicked off their summer spending; 27 per cent of parents spend more as a result of good weather, as they look to make the most of the sunshine.

When it comes to entertaining, two in five (40 per cent) parents expect to spend the most money visiting attractions, while 37 per cent of parents say family meals out will be their biggest cost. Just over a quarter (28 per cent) expect to spend the most money on treats for their children, with 22 per cent stating a holiday abroad will be their biggest expense.

There are also additional costs, aside from entertaining their children, which bump up the overall cost for mum and dads.  Parents expect to spend an average of £43 on other people’s children in addition to their own, as well as expecting to pay £78 on childcare and £97 on fuel – pushing the total potential summer expenditure to £686.

While their children will be excitedly counting down the days until summer, many parents are busy planning how they’ll cover the increased cost of summer, with over half (52 per cent) worried about how they will afford the summer costs – 41 per cent also feel under pressure to compete with other parents’ spending.

Owen Woodley, Managing Director at Post Office Money, said: “There can be many hidden costs over the summer months and while two in five parents we spoke to have the cash to cover these additional costs, many do not. 13% of parents told us they are planning on dipping into their savings, 9% will draw on their credit card and some families are even saying they’re likely to miss bill payments or even take a mortgage holiday to help manage this overspend.

“Planning in advance to find the best ways to cover any shortfall now can help relieve financial pressure and avoid negative financial implications further down the line.”

Owen Woodley continues: “If parents do plan to use credit, they should review their credit services to ensure they have the best value product to suit their needs. Avoid going into an unapproved overdraft to avoid unnecessary fees and penalty charges and review if your credit card offers the most competitive rate of interest. Some credit cards offer 0% interest rates, allowing you to spread the costs over a number of months, without incurring interest on the balance until the interest free period ends. These cards can also provide balance transfer facilities where you can transfer existing credit balances to another card that charges less interest. By using the next couple of weeks to consider the different options available to them, families can help relieve themselves of the worries connected with their upcoming summer spending.”

Post Office Money’s top five tips to prepare for the costs of summer:

1 Research conducted by Opinium on behalf of Post Office Money between 8th to 14th June 2017. 1,005 online interviews with UK parents of children under 18 years old took place. Parents expect to spend £78 a week entertaining their own children – 6 X £78 = £468. 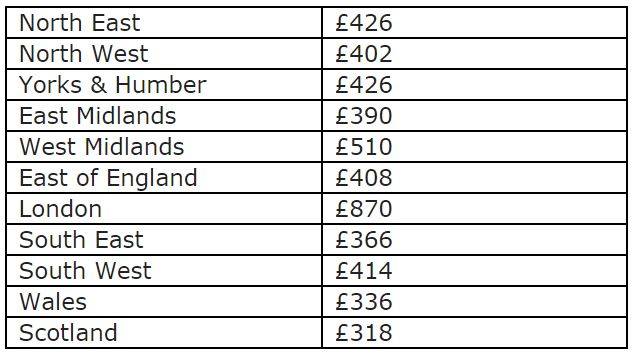