DAD.info | Fatherhood | Latest News | Sperm and Skin cells could be used to create babies one day

Scientists admitted that such a scenario was “speculative and fanciful”, but did not rule it out in principle

Sperm and skin cells could be all you need to make a baby one day, meaning that women would no longer be needed.

Working with mice, scientists at the University of Bath produced healthy offspring while bypassing the normal process of fertilising an egg cell with sperm, and without cloning.

The result means that sperm could potentially be fused with ordinary cells derived from skin or other tissue to create viable embryos.

It also raises the possibility of ethically questionable applications that turn nature on its head by doing away with the female side of reproduction.

This means that men could have babies with each other, and a man could even fertilise his own cells to produce offspring containing a mixture of genes inherited from him and his parents.

The technique could allow women whose fertility has been wiped out by cancer drugs or radiotherapy to have their own children. Currently, eggs can be frozen before cancer therapy and later fertilised in an IVF clinic, but nothing can be done once they have been lost. 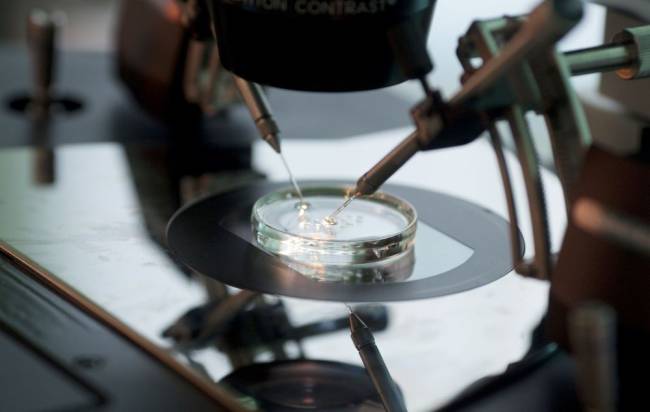 Conception using sperm and somatic cells would also aid the preservation of endangered species, since it avoids the need to recover eggs.

Lead scientist Dr Tony Perry, a molecular embryologist from the University of Bath, said: “Our work challenges the dogma, held since early embryologists first observed mammalian eggs around 1827 and observed fertilisation 50 years later, that only an egg cell fertilised with a sperm cell can result in live mammalian birth.”

But he stressed that the early work demonstrated only a principle, and major hurdles would have to be overcome before reproduction without egg cells became technically feasible.

The process relies on the sperm cell being reprogrammed in a way scientists previously thought could only occur as a result of egg fertilisation.

In the study, mouse pups were born with a success rate of 24%. This compares with a 1% to 2% success rate for offspring created by the Dolly the Sheep method of cloning by transferring DNA to donated eggs.

Dr Perry said his team was planning to take the next step of attempting to produce live offspring from ordinary non-egg cells rather than parthenogenotes.

Speaking at a press conference in London, he said: “The practical applications of this as the technology stands at the moment are not very broad.

“What we’re saying is that these embryos are mitotic cells – mitotic cells are the type of cell that almost every dividing cell in your body is. And therefore potentially one day we might be able to extend what we’ve shown in these mitotic cells to other mitotic cells. Will we be able to do that? I don’t know. But I think, if it is ever possible, one day in the distant future people will look back and say this is where it started.”