‘THREE-PARENT BABY’ TREATMENT TO GET GO-AHEAD FROM FERTILITY REGULATOR

The end result is the same – an embryo containing healthy mitochondria from the donor and nuclear DNA from the baby’s mother and father.

In theory, mitochondrial replacement can not only prevent a child developing inherited diseases, but also protect future generations.

Last year, the UK became the first country in the world to legalise mitochondrial replacement after MPs and peers voted in favour of allowing it.

The HFEA will consider the issue at a pivotal meeting on December 15, when it will decide whether clinics may make applications to offer the treatment.

If it agrees with the scientists, the first women could undergo mitochondrial replacement therapy as early as March or April next year.

Mary Herbert, Professor of Reproductive Biology at the Wellcome Trust Centre for Mitochondrial Research at the University of Newcastle, said her team was “ready” to submit an application to offer women mitochondrial replacement therapy once the go-ahead was given by the HFEA.

Prof Herbert said her team was planning a “comprehensive” NHS-funded programme of treatments at the Newcastle Fertility Centre.

She said: “We have seen a number of women with mitochondrial DNA mutations for whom the treatment would be appropriate. We’re hoping to treat up to 25 a year.

“The start date will depend on how long it takes to process the licence applications and to finalise NHS funding.”

Assuming the HFEA invites clinics to make applications, each case will be considered on a patient-by-patient basis.

A key point examined in the expert panel’s fourth and final report was mitochondrial replacement had any advantage over pre-implantation genetic diagnosis (PGD). This technique is used to screen IVF embryos for genetic defects so that only healthy ones are selected for transfer into a mother’s womb.

The scientists said PGD might be appropriate for less-affected women, but would always be no more than a “risk reduction strategy”.

They also looked at the chances of disease-causing DNA side-stepping mitochondrial treatment. Research had shown that small amounts of mtDNA, below 2%, could be “carried over” and end up in the donor egg.

This was too small an amount to cause any problems. But stem cell experiments showed that in a few cases the carried-over mtDNA multiplied and increased during embryonic development – a phenomenon known as “reversion”.

The panel concluded that reversion did not pose a serious risk and pointed out that pre-natal screening techniques would be able to pick it up before a woman gave birth.

Mothers undergoing the untried procedure will effectively be human guinea pigs whose experiences will be written up in scientific journals.

What happens to them and their children will assist scientists to develop the therapy. 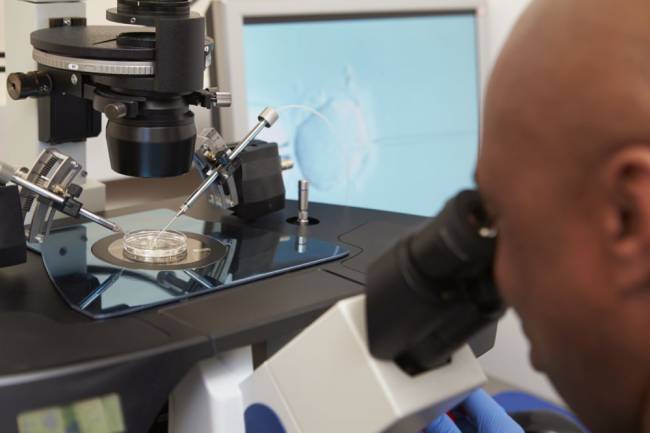 Dr Andrew Greenfield, who chaired the expert panel and is an HFEA board member, said: “We think that the cautious approach to the use of mitochondrial donation in treatment that we recommend strikes the right balance between offering access to this exciting new treatment to couples at real risk of having a genetically-related child with mitochondrial disease, while doing all we can to ensure that the treatment is safe and effective.”

“This pioneering technique could give women with mitochondrial disease the chance to have a healthy child, without the fear of passing on this condition which can lead to … multiple disabilities and indeed life-limiting impairments.

“We are thrilled to see how the procedure has advanced and look forward to the possibility that it may shortly be available to eligible women at specialist clinics.”

However, not everyone is in favour of women receiving the treatments.

Dr David Clancy, from the faculty of health and medicine at the University of Lancaster, said the technique was “currently imperfect”.

He maintained that the risk of carry-over and reversion could lead to as many as one in 30 women receiving mitochondrial replacement therapy giving birth to a child with an inherited disease.

Dr Clancy said: “By the intervention that is MRT, the evidence now suggests that, at some point, producing a child who will suffer from mitochondrial disease is a certainty. Are we, as a society, okay with that?”