The Toys Making A Comeback This Christmas

Kids throughout the country are busy editing their wish lists in the run-up to the big day – what they wanted more than anything in the world this morning at breakie could easily be relegated to the bottom division by tea time. But don’t tear your hair out just yet, as we’ve rounded up six classic TV and movie-inspired toys that are sure to be taking pride of place on letters to the fella in red this December…

Even if your kids were too young to see the latest James Bond film when it was released on 6th November (pocketing a record taking of £6.3 million), they can still recreate their own 007 car chases with this jaw-dropping Scalextric 007 SPECTRE Set – with a big helping hand from Dad, no doubt. Inside the box, they’ll find a high-performance figure-of-eight track, kitted out with all the awesome stuff you’d expect from Scalextric – leap ramps, side swipes, a 90-degree crossover and a bordered 180-degree curve designed to test even the most skilled racer. The SPECTRE also comes complete with the same sleek Aston Martin DB10 and Jaguar C-X75 featured in the film (just a fair bit smaller), two hand controllers, power supply and track spanning 532cm. This will be the one prezzie you’ll be begging them to unwrap come Christmas morning!
Hornby Hobbies Scalextric 007 SPECTRE (age 8 to Dad age!): £129.99. Scalextric.com

If there’s one thing kids can’t seem to let go of, it’s Disney’s Frozen. Alas, the new movie isn’t out until 2018, which is a lifetime for the toddlers to tweens that make up most of the film’s diehard fans. But now you can keep the magic alive with this Sing-A-Long Elsa, and give your nippers a Frozen fix to keep them going for the next couple of years. Elsa will quite happily croon the entire Let It Go song, but kids can also join in the fun with the magical microphone. And, of course, everything – from the mike and Elsa’s necklace to her snow queen dress – lights up to recreate the magical winter wonderland. Just be prepared for the whole family to want have a duet with Elsa over Christmas and beyond!
Disney’s Frozen Sing-A-Long Elsa (age 3+): £34.99. Online Marketing at eBay.co.uk

With Star Wars returning to our screens on 17th December, you can bet kids (and their lifelong SW-fan dads) will be dreaming of flying the legendary starship, which is leaner and meaner than ever. Recreate the Force in your own home with the cosmic Lego Millennium Falcon kit, which includes six mini figures – Rey, Finn, Han Solo, Chewbacca, Tasu Leech and a Kanjiklub Gang Member – plus a BB-8 Astromech Droid. This latest version of the starship is crammed with new and updated external features, including detachable cockpit, rotating top and bottom laser turrets, dual spring-loaded shooters, sensor dish, ramp and loads more awesomeness. Just remember, this is meant to be your kids’ prezzie, so no hogging it!
Lego Star Wars Millennium Falcon kit (age 9-14): £129.99. lego.co.uk

OK, there hasn’t been a famous movie with a ukulele in it for quite a few decades. Nevertheless, at the mere mention of the word, you’ll no doubt hear the non-dulcet tones of George Formby playing it to the infamous When I’m Cleaning Windows. Another, far more glam star of the era to double up with a uke was Marilyn Monroe herself in Some Like It Hot. Alas, since those Rat Pack days, the humble uke became the joke of the instrument world – cheers, George. But, believe it or not, the Luke is now very ‘cool’. In the last few years, sales have doubled, and top popsters are lining up for lessons. The good news for your kids – and your wallet – is that this tiny four-stringed guitar is not only cheaper than its big brother, it’s also a lot easier for little hands to learn to play. We particularly like the Ukulele collection from Jumping Flea (which means ‘ukulele’ in Hawaiian), as they’re specially moulded for a comfortable hold and come in colourful designs that will appeal to both boys and girls. If your kids – or you – still don’t believe it’s cool to uke, click HERE to play a clip of Smashing Pumpkins’ Billy Corgan ending his set with one. See, we told you…
Jumping Flea ukulele (age 4+): £39.95. amazon.co.uk

After more than 20 years the famous secret agent Danger Mouse is back on our screens! To celebrate the rodent’s return and introduce your offspring to the intsy hero, have a cosy Christmas Day putting together this 1,000-piece Danger Mouse Cripes! Puzzle. The jigsaw features the hero in a variety of classic poses along with his trusty sidekick, the timid bespectacled Ernest Penfold, and their boss Colonel K. Cripes! also features Danger Mouse’s archenemy, Baron Silas Greenback, a toad with a wheezy voice, and Nero, Greenback’s pet fluffy white caterpillar. Ahh, it’s good to have you back, DM!
Danger Mouse Cripes! Puzzle (age 8+): £12.95. amazon.co.uk

Whoop! This iconic show makes its return with more than a few upgrades as the newest Thunderbirds TV series means Tracy Island is bursting with the kind of cool gadgetry 1970s kids could only dream of. With a touch of a button, smart technology lets you recreate the infamous launch sequences from the show. In fact, Tracy Island is packed with over 40 action and rescue sounds. Our favourite in the DAD.Info office is the switch that makes the palm trees move back to make way for Thunderbird 2. The moveable pool is included, too, and you (er, we mean, your kids) can even do some experiments in Brain’s Laboratory. This is simply a fantasy come true for TB fans, old timers and newbies alike.
Thunderbirds Are Go Tracy Island (age 3+): £71.99. thetoyshop.co.uk 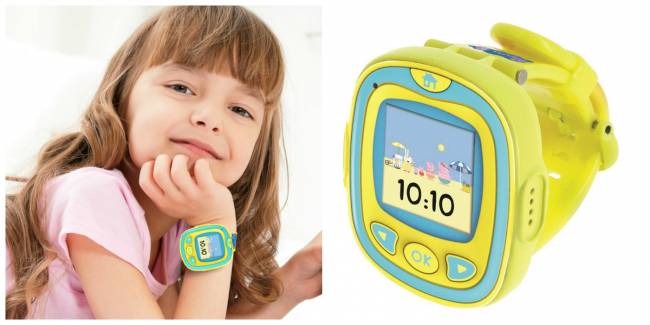 Can you believe Peppa Pig is 11 years old? She looks exactly the same wee cutey to us, and is still a fave with little ’uns and big folk alike. So for the PP fan in your home, there’s this nifty Peppa Pig Watch, which provides a good dose of educational play on the move. Besides learning to tell the time, the smart watch features 10 games to help teach about numbers, letters and music. The colour-animated and customisable screen is smashingly smart, and there’s even a voice recorder and motion sensor for added interactivity. This all comes with a colourful Peppa Pig strap that will make your pint-sized kid feel like a proper grown-up.
Peppa Pig Watch (age 3+): £19.99. johnlewis.co.uk