The six human members of Top Gear’s ‘Magnificent Seven’ have opened up about their love of cars ahead of the new series appearing on our TV screens, and there’s already a bit of friendly rivalry.

Eddie Jordan predicts it’ll be Sabine Schmitz who goes fastest on track, but newcomer Rory Reid won’t rule himself out. Chris Evans has already topped 200mph in a McLaren 675LT though, so the bar has been set high.

The team also share some of their past driving stories, from Matt Le Blanc reminiscing on the ride of his life through the Alps on honeymoon, Chris Harris telling how he named one of his children after driver Walter Rohrl and Rory discussing his favourite stretch of road.

I went at 200mph plus in the McLaren 675LT for one of our power tests.

Sabine or Chris or maybe Matt or Rory. Definitely not me.. or Eddie!

Who would be your dream guest for the next series of Top Gear?

Who taught you to drive, in what.. and did you pass first time?

I was fortunate to be taught by a rather beautiful mum of one of my friends. It was all very Mrs Robinson – in my head, not hers! I passed first time, not long after my 17th birthday.

Tell us about your best car…

My GT2 RS Porsche. It makes the hair on my neck stand up. I should shave that.

We’ll have to see. I’m guessing The Stig, though.

What was the best drive of your life and why was it so special?

Going through the Alps on a motorcycle with my wife on the back on our honeymoon. We only crashed once, so all in all it was a great ride.

What motorsport would you most like to compete in, in what car, in what era and why?

WRC right now. The cars are awesome and it looks like a blast. Ken Block took me for a ride once and I was floored. That guy can drive.

Um, 227mph in a Veyron near Karlsruhe. When I took the car back to Bugatti next morning they’d been tracking me real-time – “So you went quite fast last night? “Errr…”

Who in history would you most like to have been driven by?

Walter Röhrl in a Sport Quattro. Because he’s the man. And I did it a few years ago. It was stunning. One of my children has Walter as a middle name. I’m that much of a groupie.

What was the best drive of your life, and why was it so special?

The first drive on my own after passing my test or coming 11th at the Nurburgring 24 Hours. Or maybe simply the next drive in my old 2CV when the sun’s out, because driving is actually about the next journey.

Going down the Mulsanne Straight, I had to be doing over 200mph.

What’s the biggest mistake you’ve made in a car?

When I was 14, I nicked the car keys out of my dad’s pocket and took our Anglia 1200 out for a spin to Powerscourt, near Bray. I hit the kerb, went into the bank and put the car on its side.

Totally biased. Ayrton Senna by a mile. He was just an awesome character – calm, very kind and warm.

350kph in my friend’s Ferrari F12 on the German autobahn.

The fastest will be the one and only Stig!

Who in history would you most like to have been driven by?

By Mr Bean in his Mini Cooper, especially on the roof sitting on a sofa! Legendary stuff…

What car are you most looking forward to driving on TG?

A car which can drive, swim and fly!

I took a convertible Jaguar XKR-S to 186mph on a runway at Miramar Marine Air Station, where they shot Top Gun. Top down, obvs.

Matt’s set the bar high, but he’s a target to be aimed at. Sabine is super handy, but don’t rule me out.

If I ever get the chance to blast through the A82 from Loch Lomond to Loch Ness, then I’m a happy bunny.

A Ford Focus Eco Boost. Don’t diss the 1.0-litre turbo. It’s all about downsizing these days. 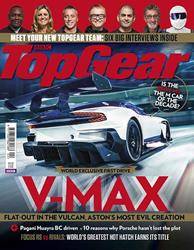 Full length interviews with the new presenters appear in the April issue of BBC Top Gear Magazine on sale 25 February 2016.

Brits CONFUSED and STRESSED over car buying! Half of British drivers don’t understand their cars

Where is it written, that man should know about motors? Long gone are the days where a weekend involved waxing and tuning up an old banger on your driveway yet somehow, who knows why, that residual feeling that I should just know about cars lingers.   Full...

You might think they're just black and round, but tyres transform a car... You’ll find Bridgestone tyres on more than 40 different models across 15 different car manufacturers, with the Japanese tyre firm taking on more than 120 new deals in 2018 alone. Vehicle...