DAD.info | Lifestyle | Play | Days Out | Days Out with the Kids | Peppa Pig and Friends Return to the Big Screen

Peppa Pig and Friends Return to the Big Screen 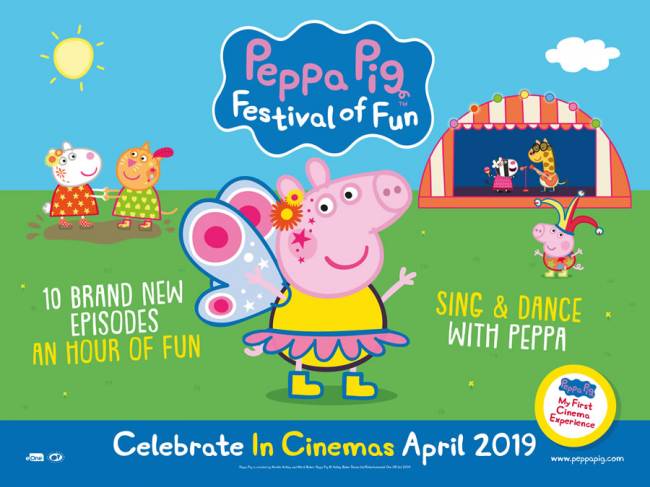 Yes, Peppa Pig is back elebrating 15 Years of Muddy Puddles with a new cinema release – Peppa Pig: Festival of Fun.

Join the party in spring 2019 when Entertainment One’s (eOne) beloved preschool series Peppa Pig will be heading back into cinemas nationwide for an all-new big screen adventure to mark the 15 year anniversary of the nation’s favourite little piggy. Set for release from April 2019, Peppa Pig: Festival of Fun is perfectly timed to entertain little ones ahead of the Easter holidays.

The hour-long theatrical release gives preschool audiences 10 brand new and never-before-broadcast episodes featuring a 2-part festival special, complete with new characters and locations. Little piggies can look forward to a whole hour of snorts and giggles with songs to sing along to and dances and movements to join in with; making it the prefect cinema outing for pre-schoolers and all the family to enjoy. Each of the ten brand-new episodes will be connected with never-before-seen interactive entertainment featuring little ones singing and playing along with their favourite onscreen characters.

Get excited for the upcoming festival season with the release of Peppa Pig: Festival of Fun and join Peppa and George in their brand new ‘oink-tastic’ adventures as they dance in the mud at a children’s festival, celebrate Grandpa Pig’s birthday at a restaurant for the first time, and take a trip to the cinema to see Super Potato’s big movie feature.

Peppa Pig: Festival of Fun:
Will be released in cinemas nationwide from April 2019

For a sneak preview check out the trailer below: