DAD.info | Lifestyle | Play | Movies | STEVE JOBS AND THE OTHER BEST FILMS OUT THIS FORTNIGHT

STEVE JOBS AND THE OTHER BEST FILMS OUT THIS FORTNIGHT

Awards season is coming, which means we have a mix of weighty biopics and alternative fodder for those not wanting their drama too heavy. The results make for intriguing and varied viewing

Fassbender looks like a lock for an Oscar nom for his portrayal of the Apple co-founder, despite being a replacement for Christian Bale.

It was a happy accident – the Irishman gives the character a pleasingly complex temperament in a movie which comes laden with award-calibre participants, as well as the ire of Jobs’ wife.

The latter probably means it’s closer to the mark than anyone would like to acknowledge and writer Aaron Sorkin’s technique of using a few important Apple launches to see inside the late icon’s mind is a clever one. Expect nominations all round.

John Niven’s novel is a cult hit amongst media folk and the OTT tale of a psychopathic A&R man arrives at the cinema with a lot of hopes pinned to it.

The black comedy of the book remains intact as do the allusions to American Psycho. Meanwhile, on-screen Hoult demonstrates how he’s one of the most magnetic British actors around.

Scout’s Guide To The Apocalypse 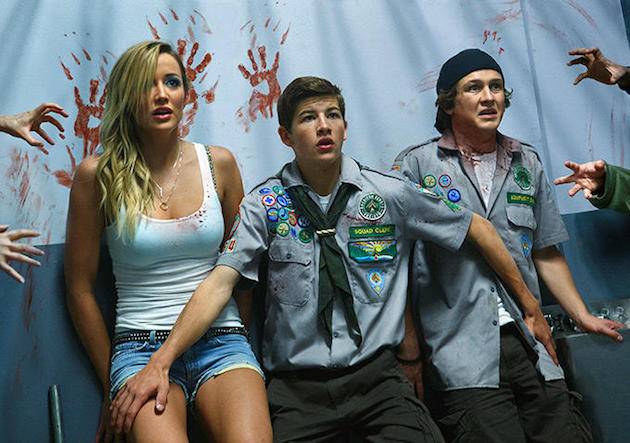 Be prepared – you never know when you’re going to have to fight off a horde of zombies.

That’s the basic conceit of this undead comedy-horror, which sees a group of youngsters take on the re-animated and stop the end of the world. The laughs and the gore come thick and fast.

Whether it’ll increase applications to the Scouts? Hmmmm…difficult to tell.

This romantic drama comes from the director of The Pursuit of Happyness, so you can guess the kind of tone it’s going for.

Seyfried is the messed-up daughter of a one-hit-wonder novelist (Crowe) who finds it difficult to fall in love when she meets a great new guy (Paul).

Cue lots of hand-wringing and emoting. Hey, the site’s called DAD.info – how are we NOT going to feature a movie with a title like this?