EXCLUSIVE: McBusted’s Tom Fletcher: ‘Being a dad is exhausting!’

The McBusted singer and children’s author, 27, opens up about the challenges he faced becoming a first-time father…

For 10 years, Tom Fletcher has been living the pop star life. In 2004, together with his McFly band mates Dougie Poynter, Danny Jones and Harry Judd, he hit the top of the UK charts with the single Five Colours In Her Hair – and then in 2013, the band hooked up with pals Matt Willis and James Bourne of Busted fame to form, wait for it, McBusted. See what they did there?

While the boys are mainly recognised for keeping the teen girl population of the world happy with their music, they’ve also made a very public transition from hopeful kids into very successful, chart-topping songwriters and musicians over the years. Some, including Tom, have even gone on to start a family.

In May 2012, Tom married his high school sweetheart Giovanna – you’ve probably watched his incredibly awesome Tom’s Groom’s speech – and earlier this year, they welcomed their first child Buzz into the world. At the same time, Tom somehow continued with a countrywide McBusted tour schedule and also managed to write his third children’s book with fellow band mate Dougie.

It’s an impressive CV for anyone, let alone someone learning how to be a first time father. Here, Tom talks to us about his new role as a doting dad – and what he’s learned since taking on the most important job of his life. Together with Dougie, he also shares his tips on making the transition into the well-respected world of being a children’s author.

Tom, congrats on yours and Dougie’s third book, The Dinosaur That Pooped The Past – where did you get the idea for the series? 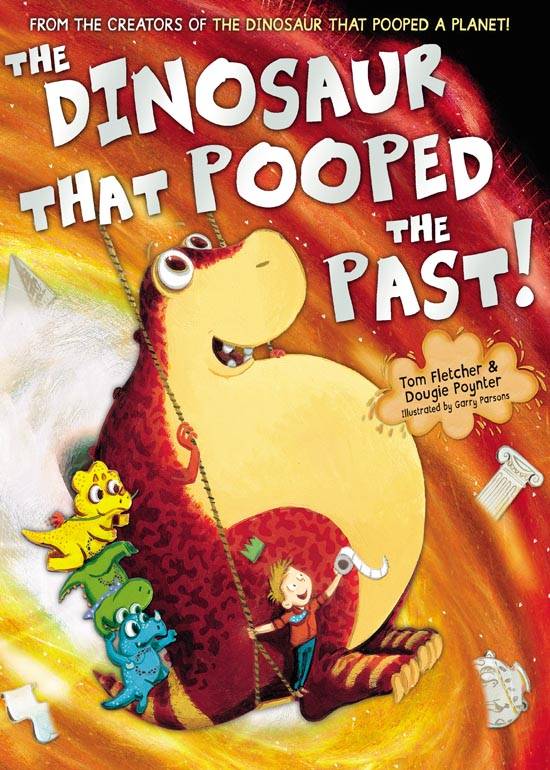 We have always spent hours in bookshops trying to get inspiration for our tours and album artwork, and we always seem to end up drifting to the kids’ section. One day we thought ‘let’s see if we could do this’. It started as a joke actually. Dougie and I didn’t think for a moment it would become a kids’ book – it was written for our own amusement. We wrote about our favourite things; Dinosaurs, Christmas… and poop!

Did you know you could write fiction?
We didn’t know how it would turn out, but there was so much in our first story, The Dinosaur That Pooped Christmas, that made us chuckle. We’d sit around and laugh at one line for ages. I think that’s how we knew we were probably doing it right.

Have you always wanted to be an author?
Yes, I always wanted to write books but I didn’t know in what capacity. I actually wrote two short children’s stories for a book called WOW! 366 in 2008 [proceeds were donated to the NSPCC] which I really enjoyed doing – and they were the first stories I ever had published. They were for kids too. From then on, I knew I wanted to do more.

What are the differences between writing lyrics for a song and writing a story?
Dougie and I have been writing songs together for 11 years – it feels like a natural progression. Songs are often nonsense poetry really and writing a kids’ book like ours is pretty similar because we know how many syllables form a good line.

That’s brilliant – especially considering you’re a new dad to Buzz, who is now nearly seven months old…
Being a dad is the best job in the world. I’ve actually been reading Buzz The Dinosaur That Pooped series but he doesn’t understand the story yet. He just smiles and screws up the pages. I think I’ll stop reading it to him for now and wait until he’s old enough to really get the story – then maybe when he’s around two years old, I’ll start again.

A lot of parents say they feel overwhelmed when they first face parenthood – did you feel that way?
I’ll tell you what – people might warn you about the lack of sleep but that still doesn’t prepare you for what it’s like. Everyone told us, ‘You’ll have to get used to no sleep’ and I thought, ‘I’m in a band, I know how to survive on very little sleep’. But nothing prepares you for the sleepless nights with a newborn. I now know what real tiredness is – what real exhaustion and fatigue is.

Tell us something about fatherhood that no one warned you about…
I learned how to be really patient – especially during those first few weeks. The first bond is usually between mum and baby. You have to respect that. Mum’s the one who has that first skin-to-skin contact and she’s going to be the one feeding the baby if you choose [to breastfeed]. The dad doesn’t have that bond, and you have to be patient through it all, making sure mum is looked after and has all she needs to feed and care for this little child. Then about six weeks in, you start to get it all back. Dad starts forming a bond and you do things like having a cuddle while watching TV and having playtime while mum rests. You begin to smile, giggle and fall asleep together – and it’s amazing. I can make Buzz laugh now in a way no one else can.

How do you manage being a dad and being rock and roll?
To be honest, I’m the least rock and roll person you’ll ever meet anyway – despite being in a band. I actually took a knitting kit on tour once. Matt [Willis] has two kids as well and it’s really good fun having the little ones on tour with us. It’s what my life is about now and I really, really love having Buzz with me.