Tonight (16 November), the brand new Band Aid 30 charity single was unveiled on The X Factor with a passionate Sir Bob Geldof making an exclusive appearance during the show to introduce the track and encourage viewers to support the release.

The song, Do They Know It’s Christmas?, which features updated lyrics to reflect the suffering caused by the current Ebola outbreak in west African countries Liberia, Sierra Leone and Guinea, is digitally released tomorrow – 30 years after the original track was recorded to support the famine in Ethiopia. Proceeds will go towards helping those affected by the epidemic.

The video opens with a shocking image of a woman, suffering from Ebola, being lifted out of her bed by medics.

As well as the big-named favourites such as Bono, Seal, Sinead O’Connor, Coldplay frontman Chris Martin and Guy Garvey of Elbow, a few younger faces have also made an appearance on the vocals – including the world’s biggest boy band One Direction, Rita Ora, Ed Sheeran, Ellie Goulding and Olly Murs. 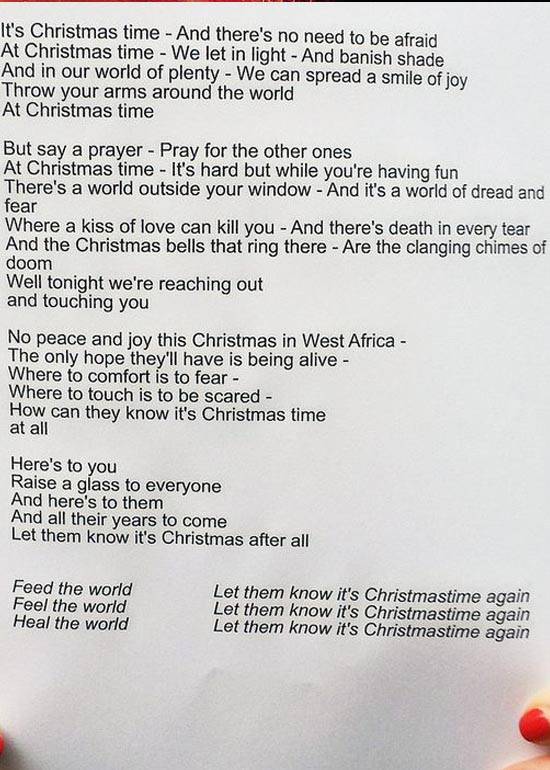 Bono still gets to sing his big line, but the lyrics have been changed. Instead of, ‘Well tonight thank God it’s them instead of you’, the line goes, ‘Well tonight we’re reaching out and touching you’.

Let’s hope Sir Bob’s new release raises as many millions as the original. Everybody: “Feed the world…”

Band Aid 30 singing Do They Know it’s Christmas? is available from 8am on Monday 17 November on iTunes