Planning something chilled out for Valentine’s Day? Perhaps a spot of dinner and a night on the sofa? Well, we have the perfect mixtape ideas to keep the romance levels to a maximum. Get ready for a night of lurrrrrve… 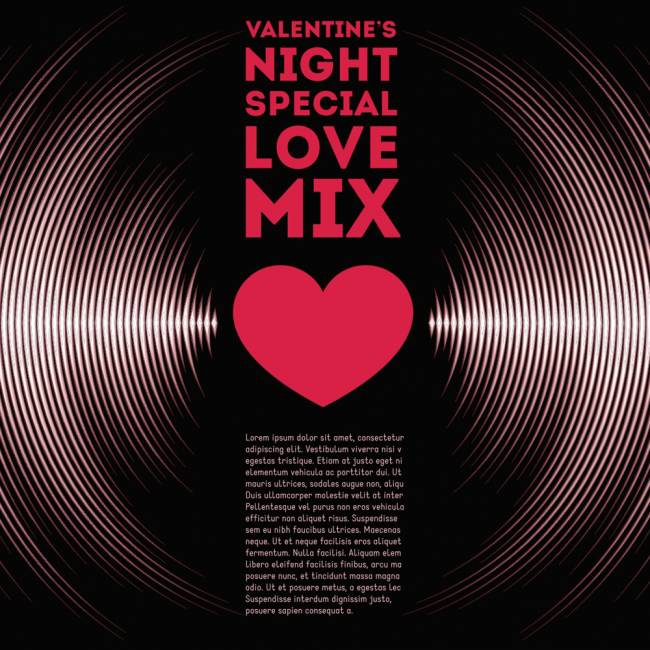 The Look of Love – Dusty Springfield

Taken from the Casino Royale soundtrack, this 1967 hit was originally composed by Burt Bacharach and Hal David. Since then Andy Williams, The Delfonics, Sergio Mendes, Diana Ross, Gladys Knight and Nina Simone have all had a pop at covering the song, but no one quite captures the mood like Dusty did.

There’s only thing you need to know and that’s to never underestimate the power of Patrick Swayze. This is the man who not only managed to get ‘Baby’ right out of that corner, but also managed to get his hands all over a pixie cut-yielding Demi Moore in Ghost. The man has talent. He also sang on the Dirty Dancing soundtrack and as such, should be known as a guru to all men.

This 1960s release from American singer-song-writer Sam was huge hit, not only for him but for those Hermit’s Hermit folks too. It’s a classic you’d hear on Capital Gold (RIP) and brings out a touch of the geeky teenage love we all miss. Ahh, the good old days!

When You Say Nothing At All – Ronan Keating

Ronan Keating recently told us more people tell him they had this track for first dance at their wedding than ask for an autograph these days. So it’s clearly a popular choice for romantics out there. Why not go the whole hog and find Nottinghill – the Hugh Grant film for which this song was the soundtrack – on Netflix too and treat her to a double whammy of good ideas.

A barbershop quintet who ooze pure romance, this fivesome might look like a regular man band, but they put even Take That to shame when it comes to harmonies. Basically they have them nailed more than anyone we know. Covering old classics and releasing a few new ones too, The Overtones have the pop market eating out of the palm of their hands – and Valentine’s Day is the perfect time to put their voices to good use.

Anyone Who Had A Heart – Cilla Black

This is the track that shot our Cilla to fame in the 1960s, and what a powerful number it is. Full of passion and strength, she’s singing love with pride. Basically a 10/10 on the romantic track scale.

A Million Love Songs – Take That

Let’s face it, when it comes to making a good ballad, Gary Barlow can do no wrong. Which is why this obvious, yet necessary, choice should be top of your playlist. If only for the sax bit at the start which gets the girls all gooey. The fact that Robbie Williams and Jason Orange are still in the video is just a massive bonus for the missus.

Remember the playground days when kissing was the most fun part of fancying someone? Well, this is the song the girls were probably listening to, while thinking, ‘I hope kissing is exactly this amazing in real life’. Stick it on the playlist and she’ll thank you for bringing back memories of innocence.

If you’re down with the kids, you’ll know this is the track sweeping the airwaves as we speak, earning young Ed Sheeran a Grammy nomination and a fair few Brit Award nominations too. The song has been in the UK top 10 since the start of December and shows no signs of slipping either. And we’re not surprised, because it’s a corker – not least because the video is just one long dance. If you’re really trying to impress, perhaps you could give that a go too. Go on, we dare you.

Through the Barricades – Spandau Ballet

It’s another oldie but goodie. Tony Hadley and co’ do what they do best here. Turning a tale of love into a story of incredible pow. Dammit, they’re good.

You can’t beat some smooth 90s R&B for when things begin to hot up. Which is why this album track by Usher and Monica (of the Boy is Mine, Brandy and Monica fame – remember her?) should be on the mixtape. By the time the soothing man-vocals of Usher have faded out, you’ll be planning a slow jam of your own. Hopefully.

Nothing quite defines a spiritual Christmas so much as watching Simon Cowell plot the domination of the race to the Christmas number one spot. Licking his lips at the prospect of continued commercial success, preparing for his yearly winning ritual for the last...