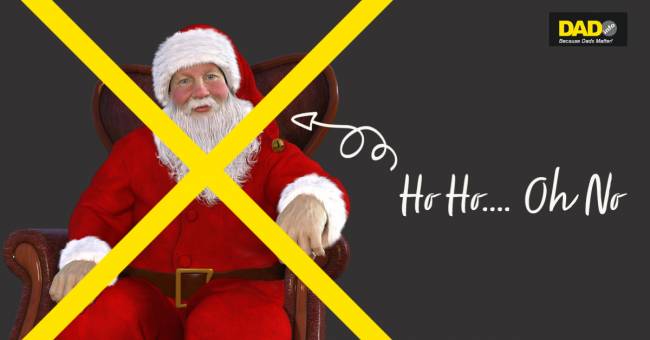 No repeat watching of Netflix’ Christmas Chronicles or reciting the old adage ‘that you have to believe to get gifts’ is going to fix this. The bubble is burst. Her cousin told her! She’s only 5. I’m so sad. All that careful creeping round in the middle of the night. The hidden stash of Santa wrapping paper.

So where does that leave us?

The average age for a child to work out that Santa isn’t real is seven! After that, if your kids are still asking for Father Christmas there is a strong possibility they are faking. They are playing along with our cleverly constructed seasonal myth in the hope that their compliance with ‘the rules’ of Christmas, i.e. stay off the naughty list and be rewarded with gifts, will be honoured.

Our daughter was more bemused than upset, she was actually pretty tickled about the lengths we had gone to.

‘What happens to the mince-pie then?’ she asks. ‘I put it back in the box’, a look of confusion and another question ‘but what about the crumbs and the bitten end of carrot on the plate?’. ‘I think about lying again, but figure now the big one has blown I might as well front the whole truth ‘I bite the carrot, and crumble the crumbs’.

I figured as we had lied to her for years about a magical creature turning into coal dust and descending down our chimney now was the time to tell her the whole truth.

So here is how we broke the news:

Yes, your cousin is right.

Technically Santa is us. No, he doesn’t fly round the world in 24 hours and the reindeers don’t land on the roof. But, the legend of Santa Claus is very real and now you know the truth you can join in. You can keep Father Christmas alive for your little sister now and for your children in the future. You can be Santa!

We have signed our daughter up as a fully-fledged member of the true believer’s club and explained that membership comes with responsibilities. We gave her some true history. Santa Claus was actually real, he just lived a long-time ago. He was a monk named St.Nicholas and lived near Myra, in what is now Turkey. St Nicholas was famous for his kindness, he gave away all his wealth, he helped the poor and sick (saved kids from a butcher’s brine tub, look it up it is quite a mediaeval story and we didn’t tell our five year old that bit!) and people loved him for it. Stories were told about St Nick, and people were inspired by his generosity. The name Santa Claus evolved from Nick’s Dutch nickname, Sinter Klaas and he used to wear mainly green, but Coca-Cola re-branded him red.

Now our Daughter knows we are all Santa, we give gifts because they bring joy and she loves that she is in on the secret and can share in all that love.

Of course, it goes without saying, she will be laying out a stocking next to the fire (and will be expecting presents), after all her little sister still believes…

It has been a tough year for musicians, an industry that depends on people socialising has perhaps sung its swansong on 2020. The Musicians Union reports tens of thousands of musicians are set for financial hardship. Despite the backdrop of Covid-19 and with admirable...