DAD.info > Family > Health > Your health > ‘There is this idea that dads don’t talk, but actually nobody asks’

‘There is this idea that dads don’t talk, but actually nobody asks’

There is more awareness than ever of postnatal mental health problems. Often we think of this as an issue for mums and many dads aren’t prepared that it can happen to them too.

However, there are fathers campaigning now to change that.

‘I was rock bottom that day. I just snapped’.

Scott Mair is an army veteran and dad of 7 boys aged 2-18. Two of his children have autism, and he also has a 2-year-old who is currently non-verbal and uses sign language.

‘With being ex-military my views on mental health were probably very extreme, because you are programmed to be a certain way. It’s this ‘pain is weakness leaving the body’ and all that powerful mindset,’ he explained. ‘It makes me cringe now but that’s the way you are programmed as a soldier. When I experienced mental health problems myself I didn’t understand it, but I also believe that to fully understand mental health you have to have experienced it. You can read 100 books but you’ll never fully understand parts of it unless you’ve been through it.’

Scott didn’t realise he was suffering until he hit rock bottom after the terrifying experience of nearly losing both his wife and his son after delivery. ‘She got really sick after the c-section and it got to the point where I actually said goodbye- I thought she was gone. That’s emotionally where I broke. It was sepsis that nearly killed her. I honestly don’t know how she survived.’

At the same time Scott’s son was seriously unwell in the neonatal unit. ‘Not being able to hold him or touch him… I was just standing there watching him thinking he can’t breathe, he’s got problems with his lungs, so in my mind, my son is dying and I can’t do anything. I have to just sit and watch it happen. I was standing there thinking I’m going to lose both of them. How can I go home to the other 6 and say mummy and your little brother aren’t coming home? That was rock bottom that day. Honestly, tough beyond words. I just snapped.’

Following that experience, Scott began to face his feelings and realise that his emotional difficulties had actually been with him for many years. ‘I found it hard because I knew I was struggling but I didn’t have enough education to know what it was. I just had this sad numbness that you hear everybody describing and I wasn’t able to connect the dots on what was causing it. I experienced it over about 8 years, and at first they put it down to me being in the military and being injured. They just kept giving me antidepressants. And then I realised that all these spirals around my mental health were around the time of pregnancies because of the anxiety of traumas happening.’

Scott and his wife had been through traumatic births before which added to his anxiety and depression. ‘We have had suspected miscarriages, traumatic deliveries, emergencies… everything you can think of, we have experienced it. And not once did anybody think that that’s going to affect you to watch those things. The births were simultaneously the best and worst days of my life. It can go wrong so quickly. And dad is just standing there in the corner thinking oh my god… and then once it’s unfolded you’re just supposed to move on.’

Scott began to find that he wasn’t alone in his struggle. ‘I heard about postnatal depression in dads and it was describing exactly what I feel. My GPs didn’t really receive it very well. Because it was always put under the umbrella of anxiety or depression they never got to the root of the problem. Every time my wife got pregnant again it spiked and I couldn’t control it. When I was talking to dads on zoom groups it just kept highlighting the fact that my story wasn’t unique.’

In his time exploring dad’s mental health, Scott has come to believe that there is a significant gap in current postnatal care. ‘We have got to talk about this. Nobody prepares you for it. There is this idea that dads don’t talk, dads wont share but actually it’s that nobody asks. I’m a firm believer that we have to support both parents. We need better postnatal mental health care. 6000 men take their own lives in the UK every year and the statistics say that 1 in 10 new dads will experience post-natal depression. We need a proper pathway for dads to get support and understand what they’re experiencing. Society has this idea of what a man should be- men don’t cry. And if we do talk- where do we go to, how do we get the support?’

In terms of taking care of his own well being, Scott has had therapy and uses writing to empty his mind on paper: ‘I journal, I write down my emotions and feelings.’ However, he explains that his depression is something he still has to manage: ‘It’s a bit like a storm cloud, it’s always there’.

-Tiredness and lack of energy

-Loss of motivation or interest in previously enjoyed activities

-Avoidance -withdrawal from friends and family

-Difficulty sleeping or wanting to sleep too much

-Loss of appetite or over-eating

Both men and women can and do experience these symptoms at any time during the earlier stages of being new parents. The important things to do are:

Notice your thoughts and feelings

Check in with yourself and ask yourself what’s going on with you at the moment. This could also take the form of an image of something in your mind, or a memory that might be linked to a sound or even a smell or taste.

Acknowledge how you are feeling.

Question the validity of your thoughts -are they realistic, or are they based on how you are feeling at the moment? How helpful are they? Remember, thoughts are not facts. When we realise the thoughts are pretty negative and not beneficial to our situation, this is when we can start to do something about changing them.

When we recognise the negative and unhelpful thoughts, we can check and challenge them, making better sense of our situation by finding an alternative thought. The best way of doing this is to keep a thought diary or worksheet, and write down our thoughts and feelings on a day-to-day basis.

ALTERNATIVE THOUGHT = I’m finding it tough at the moment, but that’s understandable as we have a new baby and he/she is taking up a lot of our time, attention and energy. We can still make time for ourselves as well as the baby though by talking to each other about how challenging things are, but also being supportive and considerate towards each other. We can also enjoy the fact we are new parents, and seeing the more positive aspects and humorous side of the challenges having children brings.

NEW FEELING = Less useless and more in control of the situation.

Never be afraid or too proud to ask for help with low mood and depression. Health Visitors and GPs are well aware of the signs and various ways of helping to get through pre and post-natal depression. They can organise referrals to counsellors and/or self-help groups where people are going through similar situations and problems and can help each other cope.

Be Kind to Yourself

The most important thing is to be kind to yourself. You might feel guilty if you’re a man, thinking that it’s a female only thing. Men often feel powerless and unable to help when their partner has been through the physical and mental challenge of giving birth and nursing a new born. Even if you have to work and cannot be around as much, offering to help and being compassionate whenever and wherever you can will make you feel as though you are a part of the parenting process.

Encourage yourself and your partner to take regular breaks. Sit quietly and do some mindful breathing techniques that can help calm those nagging doubts and any negative judgements you might be inflicting upon yourselves. Anxiety is often linked to depression, so by calming our levels of anxiety we can think more clearly and rationally about our situation.

Click HERE to check out our web chat where we will explore how men can support their mental health after becoming Dads. Dad Info will be chatting with dad’s mental health campaigner Mark Williams on the 1st March. 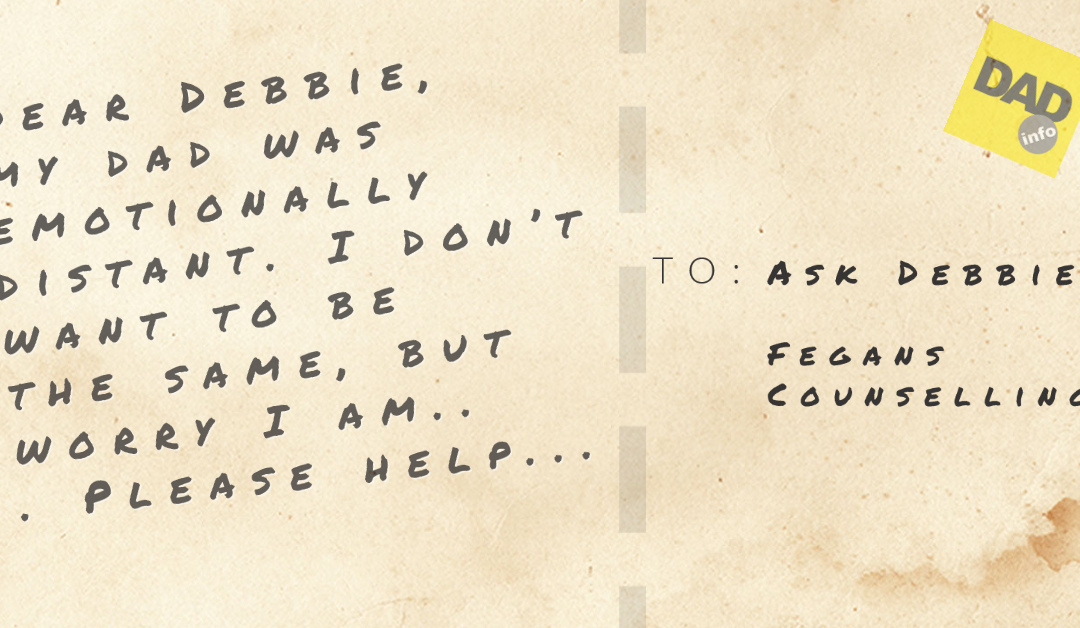 ASK DEBBIE – I don’t want to be like my Dad

Dads, do you struggle sometimes? Who do you reach out to for help? Debbie Pattison, a qualified counsellor at Fegans can answer your questions. Send them in to Ask Debbie at info@dad.info and if she can she will answer. Today's question is about not revisiting your...

Being ill as a parent is exhausting and terrifying. How can you look after your kids when you are struggling to look after yourself. As Covid-19 has struck our nation, Dad.info asked two parents to describe how they survived Covid at home. Peter’s Story Peter*, lives...