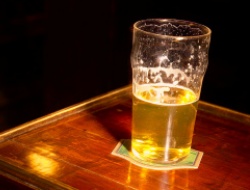 Alcohol is a drug. Studies show that more young people experience problems caused by drinking too much alcohol than from drug use. Alcohol causes ten times as much damage to the young compared with other drugs.

By 13, young people may have started drinking in groups, in a park or at parties. The group may be passing round cans or bottles and may drink quickly because they are afraid of being found out or because they want to get drunk.

Experimental drinking can lead to severe intoxication, which is more dangerous for children and adolescents than for adults. Young people experience coma at lower blood alcohol levels and can develop hypoglycaemia (low levels of blood sugar), hypothermia and breathing difficulties.

Everyone who has a drink problem started as a social or sensible drinker.

Driving ability is affected after even one drink.

A thousand young people under 15 are admitted to UK hospitals each year with acute alcohol intoxication. All need emergency treatment, many in intensive care.

Alcohol reduces will power. Good intentions are harder to achieve after a few drinks. Young people may find themselves going further than they wanted to. Unwanted pregnancies or sexually transmitted diseases can result from ‘unplanned’ sex.

Set clear limits that you can enforce. Boundaries will help you to protect your children and yourself. State clearly and often what you think is appropriate alcohol use and what is not. Children need to hear clear statements of your values and they need to see that you are willing to enforce the rules. Discover if your child understands what your views on alcohol are and why you hold them.

If your child seems curious about alcohol, talk about it. Be sure to tell them about the negative side as well as the social side. Try not to make it sound too glamorous.

Discuss with your child the ways that they might need to help a friend who is very unwell as a result of drinking excessive alcohol. Talk about the dangers of becoming unconscious, inhaling vomit, hypothermia etc. Make sure they understand how important it is to involve a caring and responsible adult.  Explore with your child creative ways that they can say “No, I’ve had enough ” or “No thanks, I’m not drinking” and still maintain the respect of their peers.

Talk about the fact that alcohol reduces inhibitions and decreases will power. Some young people regret their first sexual encounter that took place after consuming too much alcohol. Remind daughters that they can say “No”, firmly and mean it! Remind sons that “No” means “No and Stop” it never means “Maybe” or “Yes”.

Find out what alcohol education is provided in your child’s school. Do you think it is adequate – does it reflect your views? If not, what will you do about it? Consider your own pattern of drinking. What unspoken messages are you giving to your children about alcohol? Is it time to change?

Decide what you will do to ensure that your child has the information he or she needs to have fun and stay safe.“Children’s attitudes and behaviours are initially shaped by families – both directly, in that parents act as role models, and indirectly, in that levels of family support, control and conflict are linked to teenage drinking. A sensible drinking example set by parents seems to be particularly important as both abstainers and heavy drinkers are more likely to have heavy drinking children.” (Velleman, R 1992 The development of drinking behaviour in families.) Try using this quote as a basis for a family discussion