If you’ve got nostalgic memories of model cars hurtling around a figure-of-eight racetrack, but fancy an upgrade from an afternoon spent clipping together plastic track, you’re probably going to get rather excited about Anki Overdrive. As a present for the kids, of course… 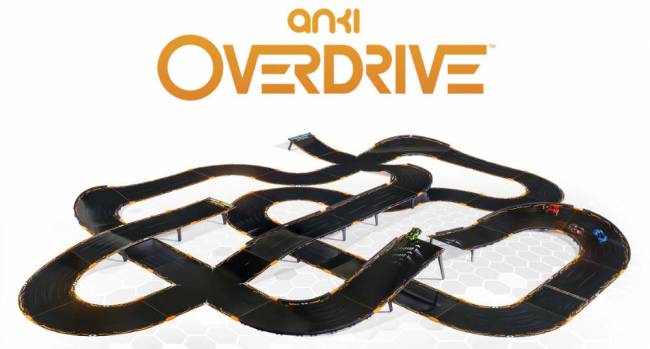 For those not yet up to speed on Anki, the robotics company made quite an impact last year when it launched Drive. Its clever blend of video games and real-world model cars enabled players to control robot vehicles using a smartphone or tablet. Now Drive is now getting a sequel in the shape of Overdrive.

Where Drive came with a flat plastic mat for its cars, Overdrive features a modular system of track parts that clip together magnetically. Criss-crossing routes, jumps and banked bends can all be built.

There are six new cars, each sporting their own virtual weapons. And there are a stack of new game modes to play.

Gameplay is controlled via your Android or iOS device. The cars read the track that they’re on to effectively drive themselves, but your input is to make tweaks to the steering, control the speed and, of course, shoot the weapons. Get your shots right and your missiles and flamethrowers will slow down the competition in front. There’s also AI competition to take on and the new game modes include time trials and a ‘King of the Hill’ mode where you must be in front of the pack when the time runs out.

Anki Overdrive is set to launch in the UK on 20 September at a price of £149.99 for a starter kit featuring a track and two cars.