Six of the best: remote-controlled drones

Ever wondered what it’s like to be a celebrity? Head down the local park with one of these remote-controlled flying machines and you’ll quickly find out. Drones are the current must-have gadget – and they’re now more affordable than ever. What’s more, improved technology means they’re easy for even a beginner to fly. Here we take a look at six of the best quadcopter drones currently on the market, from entry-level models right up to semi-pro options.

Why don’t we get started with a biggie? The Phantom 2 Vision Plus doesn’t come cheap, but if you’re serious about aerial photography then its impressive feature set demands further consideration. Three-axis camera stabilisation makes it possible to shoot judder-free video from the air, with the camera capable of shooting full-HD video at 1080p or snapping still images at 14 megapixels. The drone’s high-capacity battery will enable up to 25 minutes of flying time – significantly more than most other drones on the market. It’s ready to fly straight out of the box and has two computer-assisted flight modes to make it manageable even for beginners. And if you accidentally fly it out of range, autopilot kicks in sending the drone straight back to you. 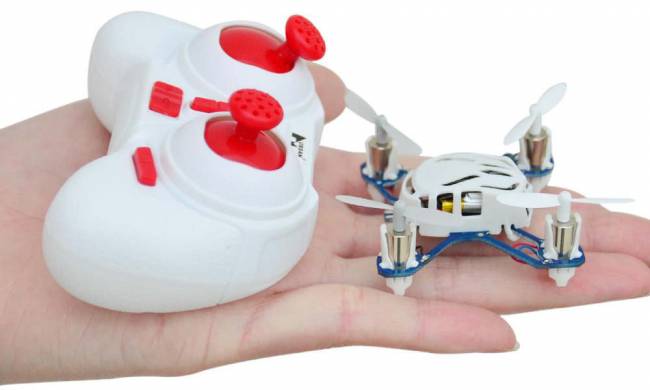 At the other end of the budget scale, we have the cut-price – and strictly indoors-only – Q4 Nano. This is about as tiny as working drones get – a miniature quadcopter that measures just 5cm x 5cm and weighs in at a featherweight 11.5g. Its remote control is similarly dinky, yet this drone is capable of impressively precise indoor flight. Its ‘position recovery’ feature means you can lob it into the air at any angle and it will automatically right itself, midair, to continue its flight. Red and blue LEDs make it look particularly striking being flown at night. 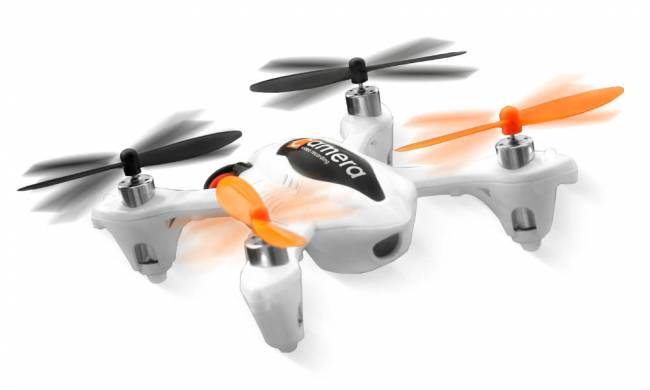 If you want to get outdoors but don’t want to spend a fortune, take a look at the Falcon: a remarkably affordable entry point into outdoor drone flying. For under £40 you get a quadcopter that can be flown up to 100m away and that includes a camera that records video to microSD card. Battery charging is via USB and is something you’ll be doing quite a lot, with a 60-minute charge providing around six minutes of flight time. The Falcon comes with a crash guard and a spare set of blades, to make things a little easier for beginner pilots, and you get a remote control thrown in, too.

You’ll need a smartphone or tablet to control the AR.Drone – it doesn’t come with its own remote control. The app features a beginners’ mode that enables you to gradually adjust the amount of control you want to take back from autopilot as your skills grow. Once you’re up and flying, you can record HD video which is automatically sent to your device, making it quick and easy to upload to the web. A USB slot provides the option to plug in a memory stick for recording longer video. You can also make like a stunt pilot by performing barrel rolls with just a single button press. If you’ve got a bit more money to spend, £430 gets you Parrot’s latest quadcopter model, the BeBop, which has a completely upgraded set of features including a full HD camera and an optional SkyController remote. 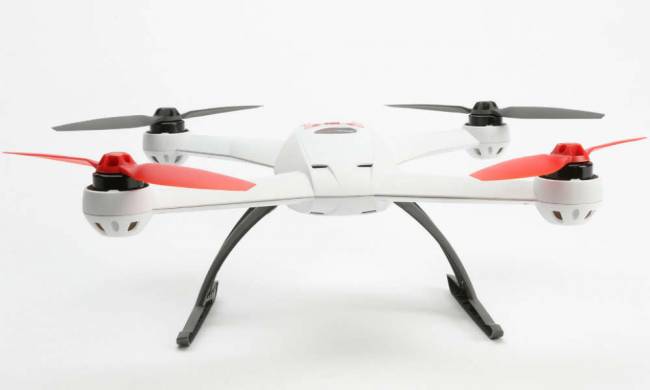 Another mid-range quadcopter drone, the 350QX comes with three different flight modes, enabling you to gradually reduce your reliance on its autopilot as your skills increase. Another handy feature for beginners is the SAFE Circle, which prevents the drone from flying too close to its pilot. A handy trick when you’re new to it all. Among the sensors inside its frame is GPS and altitude monitoring, enabling the drone to know exactly where it is and how high. Using this technology, a simply button press will instruct the drone to fly back to you – and land – on autopilot. A camera mount provides the option to add a GoPro camera. 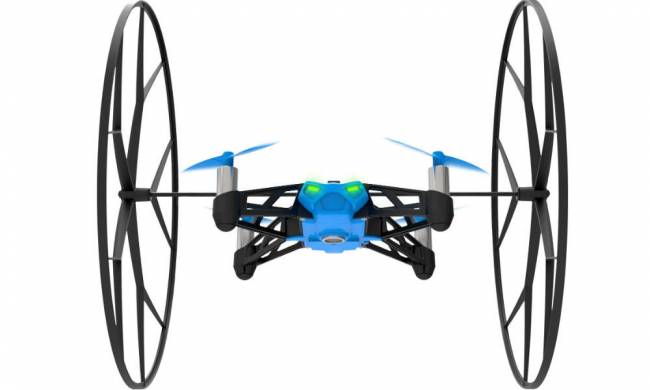 It looks a bit like a rejected design for a Star Wars Tie Fighter, but those circular contraptions surrounding the Rolling Spider are actually its wheels. They give you the option to fly it up walls and even along ceilings, as well as through the air once the wheels are detached. It’s capable of indoor and outdoor flight and there’s a base-mounted camera on board as well (although with only a 0.3 megapixel resolution). Battery life is a little low – around the six to eight minute mark – with recharging via micro USB.