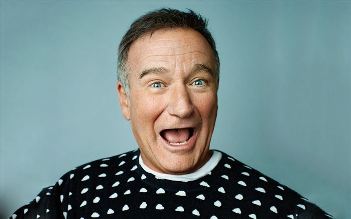 As we get older, we find the role models we grew up admiring come and go. I was shocked and saddened by the death of Robin Williams.

He was a comic genius and like many other from Hancock to Milligan he struggled with depression. His passing has stimulated a number of ideas for future blogs which I hope to share over the next few weeks, however what initially came to mind was his approach to both being a father, and divorce. Drawing from his various experiences, his stand up had rawness to it, married three times and divorced twice. You can say it was a triumph of optimism over experience… … how many dads or divorced fathers would use one of his lines to help ease the pain of divorce? One of my favorite lines is “divorce – from the latin word meaning to rip a man’s genitals out through his wallet”.

Williams also created an iconic picture of what fatherhood is about for a generation – Mrs Doubtfire, something I related to greatly  in my divorce, highlighting the lengths that dads will go to to  spend time with their children. I was reminded of this by a friend in South Wales who told me of a divorced dad whose ex-wife was stopping him seeing the children so much so that he secured a job for two hours a day as a school lunchtime supervisor so that every day he got to see his children.

I don’t think any father who has seen Disney’s Aladdin hasn’t attempted some of the many voices presented by Williams as the genie, a role which was only meant to be a few lines, and ended up growing  based on over 20 hours of improvisations. He took opportunities and made the most of them… he never let convention stand in his way.

As a father he also achieved something many dads had wanted to do, naming a child after something of importance to them. He had a phase of cyber addiction and his daughter is named Zelda, after Nintendo’s Legend of Zelda, again something he joked about.

Role models and heroes are often people we aspire to emulate, Robin Williams was one such person to me, as a performer he was a genius, as a husband and man he was human, he had flaws and demons like the rest of us, he dealt with hardship and depression, with a serious illness and eventually succumbed to thoughts that many men have faced to a greater or lesser extent.

But as a father, and man I hold one thing he said close to my heart … “You are only given a little spark of madness. You mustn’t lose it”. As a dad, I have often almost had that spark snuffed out but I know that the embers of that have been reignited, and it is only now as I have become mentally stronger and have began to burn again. The little bit of madness that makes a dad do those weird embarrassing things. The man has passed but the memory remains, and I hope you all can take a moment to ensure your spark is protected and not lose it …  spend a moment sat upside down on the sofa like Mork and contemplate your madness.