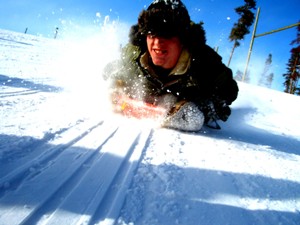 7.23am and I have just received a text from the children’s school saying that because of possible weather conditions the school will be closed today.

I have no doubt that this scenario was repeated around the country, but they knew it was coming and it isn’t that the school can’t open! My children’s school were worried that it MIGHT be worse weather at the end of the day, so parents wouldn’t be able to collect their   children.

Having driven in snow in Switzerland, Italy, and Canada I find it remarkable how badly we are prepared for this change in weather conditions. It is becoming a more common occurrence and sadly one we aren’t ready for.

My boys spent the day at their grandparents playing in the snow, my ex-wife came home early – just in case – and I carried on working… being self-employed we don’t have that luxury of paid time off!!

As it turned out, my boys had a great day with their gran, making snow men, sledging and having snow ball fights. Children love the snow but I do get annoyed at the fact we as a nation get a foot of snow and it all stops!! It happens every year.

It is now Saturday and I am off to enjoy a walk in the lovely crisp snow, take some photos and have a relaxing morning before driving to Sheffield.

In my last blog I told you I love “people watching”  ………well yesterday, I was amused by the sight of parents with great big 4×4 or SUV’s who couldn’t negotiate the Sainsbury’s car park! They were out panic buying .. trying to shop, but mainly turning it into a mechanical version of Dancing on Ice, It was entertaining, but perhaps it is also a good idea that they aren’t going near to my children’s school later! No matter what they drive, they should least learn how to adjust their driving for cold snowy icy conditions… a 4×4 and  a nice SUV doesn’t mean you drive like normal in adverse conditions.

Snow is fun, but also if you’re on sledging duties, watch out for bangs and bashes, wrap up warm,  and don’t try to be superman –   Enjoy the snow and the family time it brings.