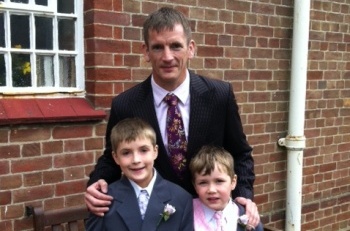 Words are strange; in a recent blog I used the phrase ‘as a single dad’ and my girlfriend was a bit annoyed. She said I wasn’t single, I was in a relationship – which I am, although we don’t live together we each have our own place. Therefore as a father or dad to my children, I am single, I don’t yet share that role. So I am a Single Dad in a relationship!

This got me thinking about all the other phrases society uses to try and label us.

The absent parent – means the parent not there but people think you’re not there voluntarily, which in the case of divorce isn’t always correct.

The non-resident parent – is very self-explanatory but feels clinical and the idea of non-custodial parent makes it sound like my children are prisoners.

An ex-wife or ex-husband and former partner are fine – but we are still partners in the raising of our children.

Describing  situations in modern families is difficult.  When asked do you have any brothers and sisters?  I reply, I have two brothers, three sisters and a step sister, it’s easier than saying …….

One brother, one step sister and one half sister, and my half sister has two half sisters and a half brother. To me (and how I treat them) they are all family.  I make no distinctions, so why should anyone else?

I have a step father – he is not my dad but he is the man married to my mum. So it is an easy mistake for some people to make, I get introduced as ‘Barbara’s son’ which is accurate and fair description.  As a man in his mid forties, I am happy with that, but how would my sons feel if I got married and if they were introduced as Marc’s boys … as young boys would they hear ‘we are not part of the new family….’

So in a second marriage they would be mine – could I get remarried and still be a single dad?

When my mum and stepdad are asked how many children they have, they say three, two boys (myself and my brother) and a girl (my stepdads daughter from his previous marriage). It’s so much easier as adults to understand the complexities of family structures!

Language is a precise tool and can often be misunderstood. If I remarried, a child can be mine and not my new wife’s but still be part of ‘our’ family, but describing that concept easily to a young child?  Just as I can be a single dad, who is in a relationship with a loving partner, the problem is – if the person reading or hearing the words sees them in a slightly different context.

The one thing I do know is regardless of who I (or my former wife) has a relationship with, lives with or marries, my children are my children. I can’t change it nor would I ever want to, because sometimes I am a non-resident parent and a co-parent but whether single or in a relationship I am always DAD!!

And as Shakespeare said…….

“What’s in a name? that which we call a rose

By any other name would smell as sweet;”