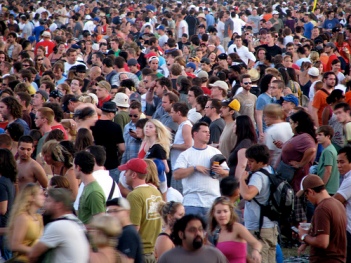 I almost lost my balance as someone pushed me in the back. I glanced over my shoulder to find the offender when an elbow jutted into my ribs and I dropped the bag I was carrying. It was mayhem all around me. I regretted the foolish, macho bravado that had got me into this ridiculous situation. I was in over my head and I didn’t know quite how I was going to get out in one piece.

The day had started so promisingly. Clare and I had bundled our Phil & Ted’s pushchair into the back of the car along with a couple of rucksack baby carriers and had driven them off to the local athletics stadium where the NCT were having their bi-annual sale.

Clare was a little teary. “Our babies are all grown up,” she said with a quiver in her voice. We’ve had some lovely memories with that buggy and those backpacks.”

I too looked a little wistfully into the middle distance, “Yeah. Do you remember that time we went down that massive hill in Sheringham Park with them both in the pushchair?”

“Not quite sure how we all survived that,” Clare agreed, “Or when we climbed up Arthur’s Seat with them both strapped to our backs in the rucksacks?”

I too nodded. She was right. The kids were too big for baby buggies and rucksacks now. They were independent little people. Arun now had a wheelchair for when we needed to travel longer distances with him but Meri, at the grand old age of three, no longer needed her wheels.

And that was where it should have ended but as we bumbled round the house on Saturday morning Clare suggested that we should pop into the NCT sale ourselves. “There might just be some stuff we are interested in. I’ll nip in as it opens,” she said, “no point going any later. All the good stuff will have gone.”

And that’s when I made the fatal mistake, “I’ll come with you. I’ve always wondered what these things are like. It’ll be interesting.”

We got to the stadium about 15 minutes before the doors opened. There was already a queue of well dressed women with immaculate hair and hollow stares waiting for the doors to open. The car park was already full but we were able to park in a disabled bay because even more foolishly we had brought the children with us.

Clare and Meri went to join the queue whilst I kept Arun entertained walking the car park. It soon became evident that tempers were on an edge. I watched several cursing women drive around the car park to find it full. I watched with disgust as one of them sheepishly, and quite immorally, pulled into the spare disabled parking bay next to ours. Before I could register a complaint, she had bundled a harassed toddler out of the car and into the queue. All the mores and manners of civilised society had broken down.

Then the doors opened. The queue slowly shuffled forward like a line of Sam Raimi zombies from the Evil Dead. As we got to the door, Clare said to me, “You look on the right there. That’s where the shoes are.”

Thirty seconds later I was in the sort of melee that would get a prop forward sin binned. Swarms of hormonally charged, aggressive and flushed women pushed, poked and elbowed their way around me to grab all the best shoes. They were like a hive of chardonnay fuelled locusts. I whimpered a lot and gripped onto Arun’s hand for dear life. I couldn’t let go as this tsunami of consumerism washed around us. I grabbed a couple of pairs of shoes and then made my way to the middle of the hall, thankful that my son and I still had all four limbs.

About thirty minutes later as we drove away from the scene we saw from the window of our car a heavily pregnant woman strapping a toddler into our old red Phil & Teds buggy with her partner standing by proudly. They were all smiling.

“At least it’s found a happy home,” Clare smiled as we passed.

I was still too traumatised to speak.

Some rights reserved by Lorenia