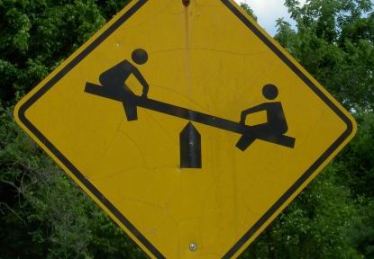 Meri let out a huge squeal and came running from the conservatory into the kitchen.

“Arun pushed me!” she complained, outrage and disgust writ large across her face.

“Yes,” she said, faux tears threatening to burst from her big brown eyes. “Arun pushed me!” she insisted.

Unbeknownst to her I had a perfect vantage point on the whole incident. What had happened was that Arun was playing in the conservatory. Meri went in there to get some of her crayons and when Arun tried to walk past her, she stopped him getting by. Arun, tried to shuffle around but when Meri bumped into him again, he gave her a little shove to get her out of the way.

Six of one and half a dozen of the other as far as I was concerned. However, what I found really amusing was the trap that Meri laid to try and get her big brother into trouble.

What-is-more, the incident reminded me of a famous anecdote in my wife’s family:

Steve, my brother-in-law was freckled, red haired three years old and his older sister Clare (later to be my darling wife) was a red haired tomboy of seven. The way Steve tells the story is that Clare hit Steve who then promptly hit Clare back. Clare, seeing that their father was just about to walk into the room turned on the waterworks and ran to daddy and told him that Steve had hit her. Poor Steve got a sound telling off and was told, “You don’t hit girls!”

Unfortunately for my daughter, the situation isn’t quite the same: her father is a feminist and she is learning that standing up for equal rights means just that. Now don’t get me wrong, I’m not for a moment countenancing that it’s OK for little boys to hit little girls but she’s got to expect the same treatment as her brother and I won’t do her any favours simply because she’s of the fairer sex.

Doesn’t stop her trying though.