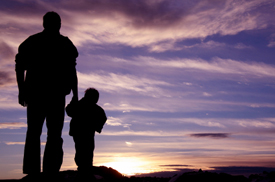 One of the most difficult questions I am ever asked is “how many kids do you have?”

Sounds simple doesn’t it? But for me the answer is more complicated – I have two surviving children Arun (5) and Meri (3) and one dead one (Rohan).

Rohan, Arun’s twin brother, died nine weeks after being born very prematurely five years ago. Arun, despite being the smaller of the two miraculously survived.  Explaining all of this to a relative stranger (for it is always a stranger that asks such a question) seems a little extreme and involved. However, simply saying “two” seems to disrespect Rohan’s memory. Even though he is no longer with us, he is still my son.

Shortly before Father’s day five years ago, my wife Clare bought me a wonderful present. As we walked to Great Ormond Street Hospital to visit Rohan, who was in intensive care there, she presented me with a small, turquoise package. I recognised it as a jewellery box from Tiffany’s. Inside was a pair of beautifully simple silver cufflinks. One had “Arun” engraved on it; the other “Rohan”.

To this day I treasure these cufflinks and wear them only on the most precious occasions. They remind me of my boys and the hope and fear that came to characterise their first difficult months on this earth.

So, father’s day is a bittersweet experience for me. It reminds me of what I have lost and of the travails that I have endured. However, much more than this it reminds me what being a father really means. Because I have lost a child I feel all too keenly what my children really mean to me and just how precious and fragile they are. The journey I have been on as a father has transformed my life. It is simpler, less cluttered (but even busier!) and happier. And for that I have my children to thank – all three of them.