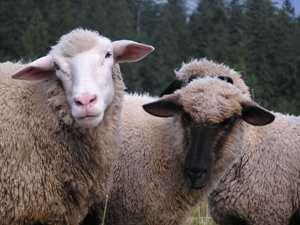 All four of us were walking along the path to the top of the hill.

“What’s that?” asked Meri as she toddled along beside me.

“Sheep poo,” I answered, “be careful not to step in it.” I urged

“Look! Sheep! Baa!” said Clare to Arun a few steps ahead of us, pointing at the flock that was the origin of the hazards that littered the path. She was trying to overcome his autistic tendencies and get him interested in something that was not directly functional to him.

Meanwhile, beside me Meri bent down and started reaching for what she thought were some interesting little pebbles. “Meri! Don’t touch those!” I bellowed at her. “That’s rabbit poo!”

“Rabbit poo? Not stones?” she asked, cocking her head quizzically.

“Yes, rabbit poo. Not stones. You really don’t want to pick that up,” I said. Yet more sound advice that will hold her in good stead all of her life I thought.

As we were batting about these observations (that I am sure that Einstein and Schrodinger would have been proud of), I saw something cream and fluffy moving quickly out of the corner of my eye. I thought nothing of it

“What poo that?” she asked pointing at a mound of earth.

“That’s not poo,” I answered, “That’s a mole hill.” I saw something small and bright blue flash past in my peripheral vision.

“No, a mole hill. It’s just earth that moles leave behind when they do digging.” I explained “Not poo.” I added just to emphasize that the conversation had taken a more cerebral, intellectual turn. Something larger and brown caught the edge of my sight.

Slowly, my tiny little mind put all the bits together and decided that I needed to pay attention to what was happening at the top of the hill.

It seems that Clare had been rather too successful in getting Arun interested in the sheep. As I watched, the flock scattered and careened over the crest of the hill.

In what can only be described as “hot pursuit” was Arun, his bright blue jacket gleaming in the spring sunshine and his long hair flowing in the wind. As he toddled at top speed after the terrified flock, he was calling, “Sheep! Baa! Where are you going? Baa!”

Racing at the rear was my wife, Clare, in her brown overcoat, coming up a sorry third. As they disappeared over the brow of the hill, I stood there holding Meri’s hand. My initial thought was ’that’s not going to end well’. My second thought was, ‘shame I don’t have my phone in my hand so I can video them’. I understand that this sort jape is quite popular on youtube.