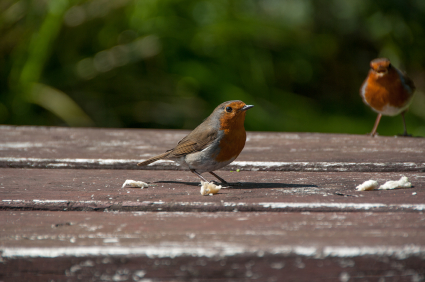 Rather unexpectedly, my family has grown. We have two new members. Don’t worry, my days of reproducing are well and truly over. I will not be adding to my brace – I can barely keep my head above water with two of them. Rather, a very nice pair of robins have taken up residence in the ivy at the bottom of our garden and, this week, two little baby robins hatched.

I first became aware of their presence when I heard a very loud tweeting from behind the garden shed and went to investigate. There, sitting in plain view was a very plump little fledgling robin. It looked me directly in the eye, cocked its head and tweeted at me urgently. My paternal instincts told me that it was demanding food. The reason I know this is that the expression on its little face was identical to Meri when she is demanding a jaffa cake. I figured that robins don’t like jaffa cakes and so put some seed and some mealy worms out for it.

Later that evening, Clare and I were enjoying the light evening by sitting outside after dinner. As we chatted I saw something plummet from the ivy to the ground behind the lavender bush. We went to investigate and a second chick stood staring back at us.

The following day, both chicks were around the garden and so I took the opportunity to introduce them to my own brood. Meri was fascinated and spent a good half an hour pointing at the incredibly tame birds and saying, “Baby robin!” whilst peering through the undergrowth at them.

Arun was less bothered but he did take the opportunity to bring his guitar into the garden and sing them his very own version of “the birds in the garden go tweet, tweet, tweet!”

The trouble is that it isn’t as if I don’t have enough to worry about. Quite apart from the prospects of my own children I am now losing sleep over whether little Robby and Roxy (we named them) are going to lead long, prosperous and happy lives. I think they will. I’ve done my bit. I’ve given them a stable, happy and secure home. I’ve provided for them (mealy worms) and have sent them off into the world with the best education (I told them to look out for cats).

I suppose it’s up to them now but that’s the thing with fledglings, you never stop worrying about them do you?

What to consider when choosing a primary school

If your child turns 4 years old between 1 September 2021 and 31 August 2022 they will most likely start school in September 2022. You will need to choose and have applied for your chosen school(s) by January- so now is the time to be visiting local primaries and...