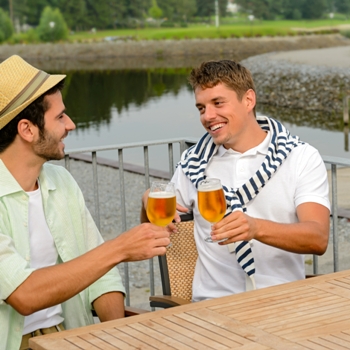 “So where were we?” asked Paddy as he kicked back in my dining room with a beer in his hand. “Three years and we just pick up from where we left off.”

“I think we were talking total turd,” I chuckled as I took another sip of my beer.

Paddy was right; we had clicked in and were chatting as if we had seen each other yesterday. However, it had been three years since we had last seen each other as Paddy now lives with his Japanese wife and two girls in Abiko, a small town about sixty miles outside of Tokyo.

“And that’s the great thing about blokes, “Paddy continued. “There’s none of the angst, the self doubt and sniping that happens with women when they don’t see friends for three weeks. We just carry on.”

“That’s because we have nothing to talk about,” I postulated.

And so it continued, late into the night with wine, beers and finally a fine selection of single malt scotch fuelling our no doubt fascinating, if content free, conversation. We started at home, passed through the pub (at a fine lock-in) and then finished up at home in the wee small hours just before dawn.

The following day Paddy set off with his family and we will most likely see him in a few more years. I’m pretty confident we’ll pick up where we left off.

A few weeks before Paddy’s visit, I was sadly attending my great uncle’s funeral. He had lived a fine life to the age of ninety four. After the ceremony, I was standing around sharing a bite to eat with some family when an old man, probably in his seventies, approached me.

Indeed he was right, I didn’t. He was unperturbed and carried on, “I’ve been married fifty years,” he said.

“That’s impressive,” I commented, it was impressive but I was confused as to where this was going.

“Do you know what happened on my wedding night?” he asked

I must have looked a little worried. He laughed.

“Well, one drink turned into another and then another.” He had a happy look in his eye as he reminisced.

“I went completely AWOL. They sent a search party out. They were amazed – the first time the groom has gone missing the after getting married. They found us the following morning, just before dawn sitting in a hotel in the next town along drinking whisky. This was in Africa mind in the 1960s, so the next town along was quite a trip. I was in quite a lot of trouble but it was worth it. You’re dad and I were great friends back in the day and I’ve been dining out on that story for fifty years.”

My face must have lit up as I laughed because he smiled at me.

“You know I’ve been married fifty years… Well I’m renewing my vows with my wife this summer. You should come…”

And then he winked, his eyes twinkling with mischief, “… you bring the scotch.”

It seems that male friendship can transcend not only the years, half the globe but also generations.