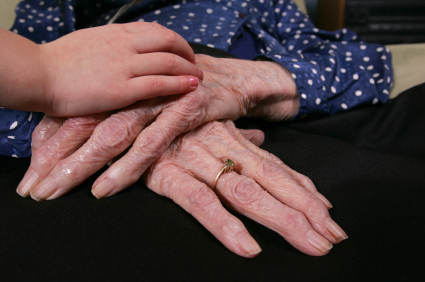 As I was walking past my two and a half year old daughter’s room I could hear the sounds of a disagreement.

“You’re a weird mixture of me and your Granny!” said my wife, Clare, in an exasperated voice, ”And that’s not a good thing!”

Meri just squealed and the disagreement, over God only knows what, continued.

Clare was right, Meri has picked up many traits from both her mother and her Grandmother, my mum. The female genes are strong in my family.

Meri never walks anywhere when she can run. She never sits when she can stand. If we could wire her into the national grid she would solve all of Britain’s energy problems. She is a perpetual motion machine fuelled by nothing more than smoked salmon, pain au chocolat and cous cous. Now, if we could wire her Granny into the national grid as well we could solve the world’s energy problems, this time fuelled by aubergine curry and dhal. At the grand age of 76 she is still working and showing few signs of slowing down. Indeed, her Grandchildren have knocked ten years off her (whilst they have added ten years to me).

Meri also has a contrary streak. Now, I have to be careful here because my darling wife also reads this blog on occasion. I would like to state for the record that my wife is definitely not contrary and is very willing to take advice and direction when appropriate (it’s just that in her tiny little mind it is never appropriate…). Meri has many of the same traits: If you ask Meri to put on her yellow shoes, she will insist on putting on her strawberry ones but when you reach for the strawberry shoes she will demand the yellow ones.

Meri is also incredibly determined. Once she puts her mind to doing something she is rarely deflected: If she wants to put on her stripy tights, she will put on her stripy tights; if she wants to climb the big slide in the playground she will do it. She is also incredibly independent – she will insist on doing everything herself and will be mortified if her fool of a father tries to help. She gets these traits from both her mother and her Grandmother. My mum carved out a career for herself whilst raising a family alone after the premature death of my father; Clare has excelled in a male dominated profession whilst being a fantastic mum to her two children.

However, Clare was wrong about one thing. Being an odd mixture of her mother and her Granny is actually a very good thing for little Meri.  She is incredibly lucky to have two such strong and positive female role models in her life.

The flip side, though, is that I am screwed. With a family that contains a Boudicca, a Thatcher and a Pankhurst, I don’t stand a chance.