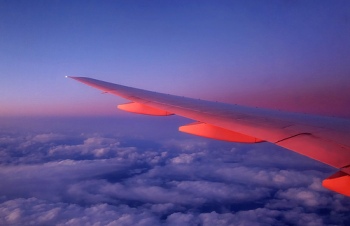 I was sitting on the slightly grubby carpet of the airport with my three year old daughter, looking out of the panoramic glass windows as a jet airliner roared down the runway and soared into the sky.

“The wonderful things about aeroplanes,” I said to Meri, “is that they can take you literally, anywhere, anywhere in the whole world.”

She looked at me with wide eyed amazement. I could see the cogs and wheels of her little mind whirring as she took in the enormity of the possibilities that this unleashed. After some time she turned to me having thought about it and asked, “Even Wimpole Farm?”

I laughed. In the little world of a three year old, the National Trust farm just outside of Cambridge was just about the most exotic, glamorous and exciting place she could travel to.

A few minutes later, they called our row number to board the aircraft. We were going on Meri’s first ever flight to visit my grandmother and relatives up in Scotland.

She was a little bewildered and clingy as we made our way onto the plane. She refused to pose on the steps of the aircraft for the obligatory photograph of her maiden flight but the moment she got onto the plane, all was forgotten. She tucked into the window seat she had been allocated and immediately grabbed the seatbelt and clicked herself in. I was surprised, she had never seen an aircraft style seatbelt before but she understood it instinctively.

As the plane rumbled down the runway, her excitement grew as I explained we were going to take-off. When we reached the runway and as the pilot gunned the engines she held onto my hand, half in excitement, half in fear. But the moment we got into the sky she was staring out of the window in fascination as our ascent turned the big world below us into toy sized proportions.

As we cleared the clouds and flew high above them she pointed out of the window.

“Snow!” she said, pointing at the fluffy white clouds far below us.

She thought about this for a while, “Did the clouds go down?” she asked.

The flight was a short one. Some chocolate and a chat with the air stewardess kept Meri perfectly well entertained until it was time to land. Meri looked out of the window intently and howled with joy and laughter as the wheels touched down, noisily, on the tarmac. She giggled so much that passengers in the seats around us started laughing as well.

I looked at her proudly. A first in very child’s life is an exciting and important moment. I have been lucky enough to travel the world and I hope that Meri gets the same chances I did. What she does with them is entirely up to her, even if it is just to go to Wimpole Farm down the road.

Some rights reserved by Captain Kimo