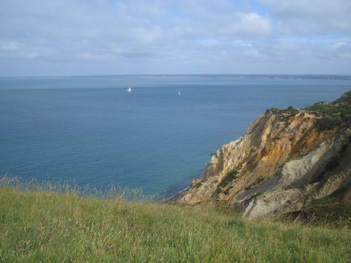 I watched spellbound as three year old Meri set off with that knowingly wicked look in her eye.

“I don’t believe she’s just done that,” I turned to Clare my wife, “she insists on being carried on my shoulders all the way here claiming she’s tired and the minute we get here she shoots off.”

“Yeah, that may be true but you might want to pay attention to where she’s shooting off to,” Clare nodded in the direction of the cliff that Meri was sprinting towards.

“Oh ****!” I picked myself up off the comfortable grass and took off after at full pace.

I caught her about 50 yards from the edge of the cliffs. We were on holiday and the cliffs in question were the vertiginous strata overlooking Harry’s Rock in Dorset where we were holidaying.

As I carried a suitably admonished and wriggling daughter back to where my wife and son were watching in some amusement I thought to myself, “Jeez, she’s fast. I’m going to be in trouble when she grows up.”

That was three months ago. Last week we were on holiday in Norfolk. This time as we came over the crest of the sea defences on the beach at Wells, little Meri squealed in excitement and took off again, this time heading for some beautiful sand dunes a few hundred yards away on the stunning flat seascape of the North Norfolk coastline.

Clare and I continued chatting for a few moments and when I next looked up, Meri was well over half way there.

“Oh ****,” I muttered again and took off after her. This time, she looked over her shoulder and knowing she wasn’t doing anything naughty, turned it into a big game.

“Daddy,” she hollered, “you pretend you’re a big monster!”

I made the requisite roaring noises and finally caught her and gave her a big hug and tickle. I then got her to chase me all the way back, pretending that she was a monster (which, by the way, beneath that cute little girl exterior, she absolutely is).

As I collapsed on the sand having led her back to where her mother and brother were, yet again, watching with some amusement, I was distinctly out of breath. I looked at her, expecting her to be panting and tired.

She giggled. Giggled! And then she smiled, “Now you chase me Daddy.”

My father in law once told me that one of the proudest and saddest moments in his life was when his twelve year old daughter outstripped him in the swimming pool. I can understand that, but frankly there’s something to be proud of in the story of a twelve year old taking on a fifty one year old. I’m afraid that a three year old outstripping a forty two year old is just sad.