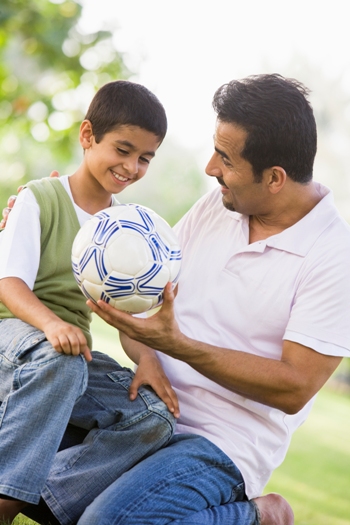 “Yes it is,” I answered, “but it’s even more wonderful than you think.”

Arun has cerebral palsy, autism and learning difficulties. One of the ways his differences manifest themselves is that Arun doesn’t really play. If you think about it, it’s hard to imagine a child that doesn’t play – one that doesn’t pick up a toy car and go “brum, brum”, one that doesn’t grab his very gregarious sister and ask to play hide and seek, one that doesn’t want to roll the dice for snakes and ladders. But that is what Arun is like.

The last three months have seen a transformation. For the first time ever, he started showing an interest in other children. His teacher at school reported that, prompted by an adult, he had held a conversation with a little girl in his class about his recent holiday to Scotland. A few weeks later his granny taught him to play with a toy bus, like the one that takes him to his special needs school. The children got on and off and the bus did, indeed, go “brum, brum.” And more recently, as we’ve enjoyed the wonderful hot weather, Arun and his little sister Meri have been playing beautifully in our garden. They take it in turns on Arun’s balance bike, they play with a ball and Meri marches Arun around the garden by the hand and bosses him around, just like a sister should.

The difference has been Arun’s new school. Specialising in learning difficulties and autism, the head of primary confidently told us when we joined at Easter, “People say that you can’t teach children to play but we disagree. You can teach them to play and we do.” Every parent knows that play is such an important part of our development that “learning to play” must be a priority for all children.

They are having a ball and we, as their parents are having a ball too. Last Sunday morning we sat in our dining room reading the Sunday papers as the two of them careered around the garden laughing, running and playing together. Quite apart from the 45 minutes of respite from childcare, the happy noises we listened to lifted our spirits no end.

Meri has always been Arun’s best friend and I suspect she is his favourite person in the whole world. She is the only other little person he has ever really been interested in and the only little person who has really understood him. But now she is something new, something else, something deeper and more profound: She’s his first ever friend.

So much so that Ursula, a very experienced and outstanding head-teacher was moved to comment on how well the two of them played together. I can’t describe how proud I felt.