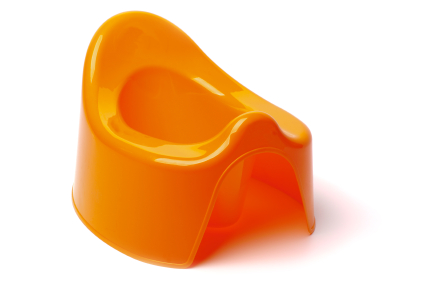 “She’s going to be an investment banker,” I said.

We looked at Meri, aged 2 and a half, with a mixture of astounded admiration and head-shaking horror.

What was it that had prompted these troubled ruminations? It was the end of the Meri’s first day of potty training.

The day had started with wide eyed hope and optimism. As I got Meri up I explained to her, “Today is a very important day. Meri’s a big girl now and doesn’t do wee-wees in her nappy any more. She’s going to do wee-wees in the potty!”

I was enthusiastic, confident and reassuring. However, the first problem came almost immediately. Meri wanted to wear tights with her skirt. Given that I wanted as few obstacles as possible between her bottom and the potty seat, I figured that a pair of tights was not such a good idea. Meri disagreed. After much bickering and some screaming, I won the argument and off we went for our first sit on the potty.

Following instructions, I sat Meri on the potty every twenty minutes or so. Praised her for the simple act of sitting there and prepared to praise her even more when she did a wee-wee. However, things didn’t quite go to plan.

At lunchtime the score was: Lounge Carpet 3, Potty 0

Now, this was quite an achievement given that we were doing most of our potty training in the conservatory which is at the other end of the house. Not only this, the lounge is the only room downstairs that has carpet, the rest of it has either wooden floors or tiles. Furthermore, I had laid down an oilcloth over most of the lounge in anticipation of some accidents. However, her unerring accuracy in finding the 5% of the downstairs floor space that was absorbent and would stain was remarkable.

I kept going, unfazed and determined. I had every confidence that she would get it soon. By tea-time the running total was:  Lounge carpet 3, Kitchen floor 1, Conservatory floor 1, Potty 0.

By this stage I was starting to get disheartened. My faith was wavering – maybe it was too soon, maybe we could try again in a month’s time, maybe this was something that my wife should do (a very attractive option at this point in time).

And then it happened. At about 4 o’clock, Meri toddled over to the potty, dropped her knickers and did a little wee. She pointed it out to me triumphantly. We jumped around, gave each other hugs and kisses and generally celebrated like we had just scored the winning goal in the world cup final. Meri was duly rewarded with a sticker.

Meri was delighted. Fifteen minutes later, she toddled over to the potty again and repeated the feat. Cue more celebrations.

After another fifteen minutes the same thing happened.

When she went back to the potty for the fourth time in an hour and expected yet more praise and adulation, Clare and I were wise to her game. We encouraged her to stay on the potty a little longer and do a proper wee, which she did after some coercion.

Not only had potty training clicked with Meri, but within minutes of figuring out how to do it she had also figured out how to arbitrage the system. She knew that a big wee or a small wee got her the same reward. So, with impeccable logic, and not to mention bladder control, she had opted for lots of little wees.

I think Clare is right – probably a lawyer. I just hope she’s on my side although I doubt I’ll be able to afford her fees…