The Wisdom of Solomon 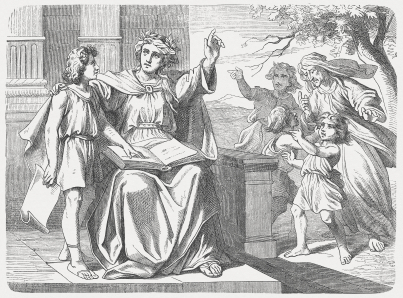 Arun and Meri were in the bath together, playing and splashing nicely. I smiled down at them and said, “It’s Wednesday, we need to wash hair tonight. Who’s going to go first?”

They looked at one another and then at me. With impeccable comic timing Arun pointed at Meri and said, “Meri go first!” just as Meri pointed at Arun and said, “Arun go first!”

Sometimes, just sometimes, the moon, the planets and the stars are in alignment and my children agree on what should be happening but to be honest I think we see Haley’s Comet more often. Today was no exception.

Just before bath time we had been listening to music and dancing together in the dining room. I said, “One more song before we go and have a bath. What song do you want to listen to?”

Meri shouted “Girl from Mars!” just as Arun shouted out, “Shining Light!” (We are going through a bit of an early nineties Indie pop-rock phase in my house at the moment and Ash are the flavour of the month).

Earlier in the day I had asked them what DVD they wanted to watch. Meri asked for “The Jungle Book” whilst Arun insisted on the “Foo Fighters”.

This constant low level bickering puts me in a difficult situation. I have to dispense the wisdom of Solomon several times a day. Most people who know me will tell you that I have nothing like the wisdom that of the famed Biblical king (thankfully, I don’t have as many children or wives either). So, how do I pick between them? Easy – I just go with whichever thing I fancy doing the most. It may be selfish but I figure it evens out between them most days.

However, there are some disagreements where I have to take sides. After bathtime was over, I asked the kids, “Where shall we read bedtime stories? In Arun’s room or in Meri’s room?”

This confused me. Normally the kids want to read stories in their own room but then I remembered what had happened the night before. Just as storytime was finishing Arun had suffered a particularly nasty bout of reflux and had thrown up all over Meri’s room. The armchair and the carpet were still recovering and the whole room smelt of stale vomit. Unsurprisingly, Meri didn’t want to risk another incident on her turf. Arun (he may be disabled but he’s not stupid) had clearly decided that Meri’s room was a far better place to be sick than his own.

We read stories in Arun’s room that night. Why? Solomon would say because it wouldn’t be fair to Meri if Arun did throw up again.

However, as I said earlier, I’m no Solomon. I just didn’t want to sit in a room that stank of puke.