DAD.info | DAD BLOGS: Mrunal | The World according to Meri

The World according to Meri 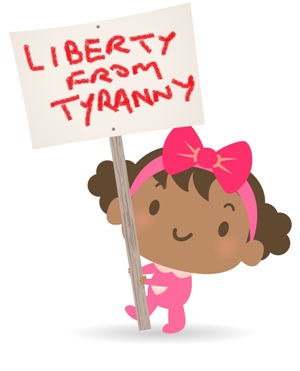 This week Mrunal’s 22 month old daughter takes over as she explains to the world why her Dad is a horrid, nasty man and that she is definitely not entering the terrible twos a couple of months early.

Right, let’s get one thing straight: I am a delightful, angelic, beautiful little toddler that any father should be proud of. However, I seem to have suffered the misfortune of being born into the family of a complete monster. The man is a complete control freak who makes Pol Pot look like Ed Milliband. I am living in a totalitarian state under a malevolent despot whose time has come. Taking my inspiration from the Arab spring last year I have decided to rise up and assert by inalienable rights as a toddler. I will be triumphant and just as Saddam was toppled so will the evil, unjust regime of Daddy. Let me give you some examples of his completely unreasonable behaviour.

Yesterday I was on one of my long and boring walks with Mum, Dad and Arun when I made an incredible discovery. There is a brilliant playground in the park at the end of the road. Lucky I was there to find it because left to his own devices Dad would never have found it. Anyway, I discovered this brilliant thing called a slide. You climb up some stairs and then you “wheeee!!!!” your way down this slippy thing. I was happily playing on this and was ready to make further discoveries like the swings and the roundabout when Dad said it was time to go.

I wasn’t ready to go home so I decided to lay down on the ground and writhe around. The Monster picked me up and started carrying me home. I wriggled some more and shouted “Down!” a lot. He finally got the message and put me down but the fiend insisted that I hold his hand. So, I managed to break free and ran back towards the playground giggling. He caught me and carried me all the way home screaming.

Today we went on a car journey to Woburn to have a run around the sculpture garden. Dad tried to get me to look at some really boring sculptures which I obviously ignored. It was only when I found the ducks that we all started to have a good time. I taught Daddy that ducks say “Quack!” (He really would be lost without me). On the way back I decided to wriggle my arms out of the top half of my five point safety harness in my car-seat. Daddy put my arms back and told me off. I squawked at him and took my arms back out. Daddy then stopped the car, got out, put the harness back on and tightened it up so that I couldn’t wriggle my arms out at all. If this doesn’t constitute torture under the Geneva Convention I don’t know what does.

The final injustice, the final nail in the tyrant’s coffin came this afternoon. He moved one of the toys that I was not playing with! Can you believe it! He touched and moved a toy that was nowhere near me, that I had shown no interest in for at least 30 minutes and put it in a slightly different place. Can you imagine the nerve of the man! I, of course, refused to stand for this and went into complete meltdown throwing myself onto all fours and sobbing like a demented fishwife. And what did he do? Nothing! Nothing, other than muttering something about, “how long before you go to University?”