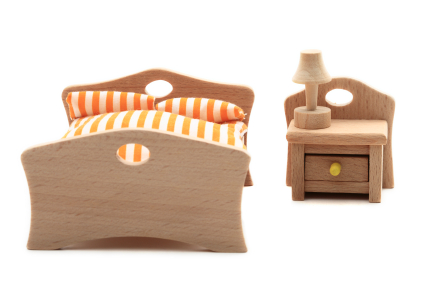 “I’ve got a bad feeling about this…” my wife Clare said as we took Meri into her room.

Given that my little girl turned three a month ago, we thought it was about time that she had a proper, big girl’s bed and today was the day that we were going to turn her cot, into a bed.

“Yeah,” I agreed, “I don’t think either of us are ever going to get a lie-in ever again.”

We sat little Meri down and explained that today was a very important day and that she was going to get a new bed but that she needed to be a very good girl from now on. We showed her the new Winnie-the-Pooh night/day clock and explained that when it turned from night to day (7am) that’s when she could get out of bed to play with her toys but emphasised that she could not come out of her room unless she wanted to do a wee-wee. And in no, absolutely no circumstances was she to come and find Mummy and Daddy until they came to find her.

“Do you think that will work?” I asked Clare.

She looked at me sceptically, “What do you think?”

Meri was deliriously excited by her new bed and to demonstrate how pleased she was she took to it almost immediately. Come bedtime, she was a little angel as I tucked her into her fairy bedsheets. That first night we were amazed to find that she slept through and followed her instructions to the letter.

The second night, Clare took her to bed and again, she settled in with real enthusiasm.

Clare came downstairs happily and tempting fate said, “I think we might have cracked it.”

We were having dinner downstairs with our next-door-neighbours when we heard a thud from above the dining room and then a little squawk from the baby monitor on the mantelpiece. Meri’s bedroom is above the dining room. We waited with baited breath for the pitter patter of little feet but none came. Clare quietly went upstairs to investigate and found Meri settling herself down to sleep again on the bedroom floor next to her bed. Clare quietly picked her up and put her back into bed.

“Silly mare fell out of bed,” was the report when she came back downstairs again.

The following night I had just gotten into bed and was drifting off happily whilst reading my book when I heard another thud and a squawk from Meri’s room. I went to investigate and there was my darling daughter lying on the floor next to her new bed curled up in her duvet. I picked her up and put her back.

As I write this, it is now day four for Meri in her new bed. There have been no thuds as yet but I wouldn’t bet against it.

Clare was right to have had a bad feeling about Meri’s new bed but for all the wrong reasons. It’s working out fine for us as Meri is following her instructions to the letter. Unfortunately, her dingbat parents forgot to instruct her that she shouldn’t fall out of bed every night.