So, last weekend I electrocuted myself… 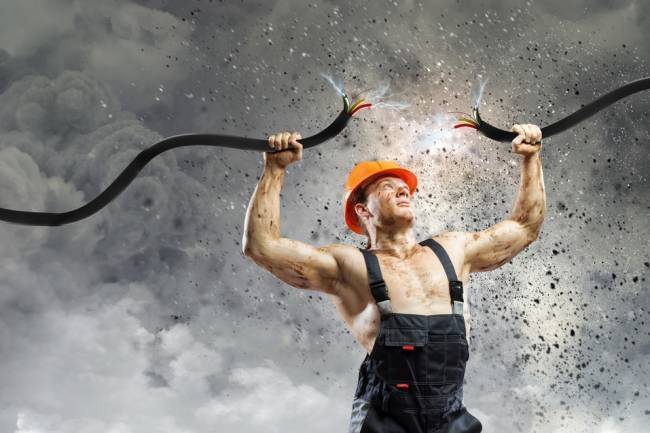 No, I haven’t adopted a weird new hobby, or fallen in with the wrong crowd. I was just doing a bit of DIY. Or trying to.

You may remember that Faith and I bought our first house about 18 months ago. I’m in my mid-30s, and we’ve been renting since we got married, so DIY was never something I really had to learn to do. If something broke, we called the landlord. And then, in our case, our landlord would either never fix it, or take two weeks to repair our toilet, forcing us to do the unthinkable at local coffee shops and friends’ houses (that really happened once. I’d rather not talk about it). I actually owned a DIY book that Faith bought me for Christmas one year, and every summer we used it to prop up our bay window that wouldn’t stay open. It became a bit of a joke with the neighbours.

When we bought the house, it was one of the things we were most excited about. Now, if something broke, we could fix it ourselves. Sure, we’d also have to pay for it ourselves – but at least it would actually get done. We wouldn’t be left waiting in Home-Repair Purgatory for weeks at a time, wondering if the landlord – whom we’d never seen in person – would ever get around to replacing the 15-year-old boiler that broke every winter (he didn’t).

Since we moved in, it’s been a steep but mostly positive learning curve. I have YouTube to thank, really. What did people do before YouTube? From Youtube, I have learned how to put up a shelf, how to install a new set of blinds, and how to pipe in a washing machine.

So when our outside motion-detector light stopped working a few weeks ago, and then our inside porch light immediately after, I thought, “No problem. YouTube and I can handle this.”

Last Saturday, I got my tools out and told Faith I would be tackling the light situation, and she said she was planning to clean our bedroom, so she went upstairs and I set to work on the electrics.

Now, I’m a smart man. And I was raised by a very handy father. So I know that you have to turn off the electricity before you start poking around in the wiring. And I did, the first time. And the next 10 times, as I poked around, and then back on to check if the light was working yet. It’s just that, at some point, you kind of forget whether you’ve just turned it off, or just turned it on, and I poked, and felt a jolt of electricity enter my body and knock me off my footstool.

I expected sympathy, but what I got was a look of rage. Apparently she is not ready to raise our children alone, and was unimpressed that I could be so careless.

I suppose she has a point.

And now one week later, the light still isn’t working. I never thought I’d say this, but YouTube has let me down, and I have a feeling I’m about to be introduced to a facet of home ownership I was really hoping I wouldn’t have to encounter quite yet: hiring an electrician.

On Friday morning I was balanced on a miniature chair at a regular size table in the back of a school hall... I was surrounded by tea, cake and mobile phones as they awaited the arrival of the 'performers'. We didn't have to wait long and I'd only just started on my...