Just trying to raise some awareness for a rare disease called Kawasaki. My daughter was diagnosed over Christmas last year... my post below.

Kawasaki… if someone mentioned that word you’d probably think of motorbikes. So did I.

That was until we took Ellie to the GP because of a persistent fever and other symptoms. The GP referred us straight to Birmingham Children’s Hospital as she suspected Ellie might have Kawasaki Disease. It was our 4th visit to the GP in 12 days but the first time Kawasaki had been suspected.

Kawasaki is a rare condition that mainly affects young children – up to 80% of cases occur in under 5 year olds. In the UK it affects around 8 in 100,000 children but the exact cause is unknown. It causes the blood vessels to become inflamed and swollen, which can lead to complications in the coronary arteries such as aneurism or blood clots, leading to heart attacks or strokes.

Most children make a full recovery – if treatment starts within 10 days of the first symptoms appearing, around 5% of patients experience long term problems. However if not treated in time the chances of complications is increased and that figure rises to 25%. In 1 % of cases it can be fatal. This makes Kawasaki the leading cause of acquired heart disease in the UK.

After a number of tests the Consultants confirmed Ellie’s diagnosis, and began treatment. This consisted of 2 days of Corticosteroids - a hormonal based i.v. antibiotic, a 10 hour i.v. immunoglobulin infusion and high dose aspirin to thin the blood to help prevent clotting.

After 3 days in hospital and various blood tests and heart scans, Ellie was discharged late on Christmas Eve - the best Christmas present we could hope for! Now she is much better in herself, but she is still on medication and we have to wait until the end of the Kawasaki cycle before we find out if there is any long term damage to her heart. We also have the concern of Reye’s syndrome due to her still taking aspirin (although we have been assured this is low risk).

I wanted to write something to raise some awareness of Kawasaki. There’s very little known about the disease and it cannot be prevented, but if we’d have known what to look out for, we would have pushed the GP and Ellie may have received treatment within those important first 10 days.

If your child has a fever please watch out for the following signs:

Another key symptom is peeling skin on the fingers/toes – this is what alerted our GP finally. However this marks the 2nd phase of Kawasaki and is a sign the disease is advanced.

If your child has had fever for at least five days, and any of the symptoms above then push for further investigation. It may well be nothing, but being cautious is far better than the potential lasting consequences of Kawasaki Disease. 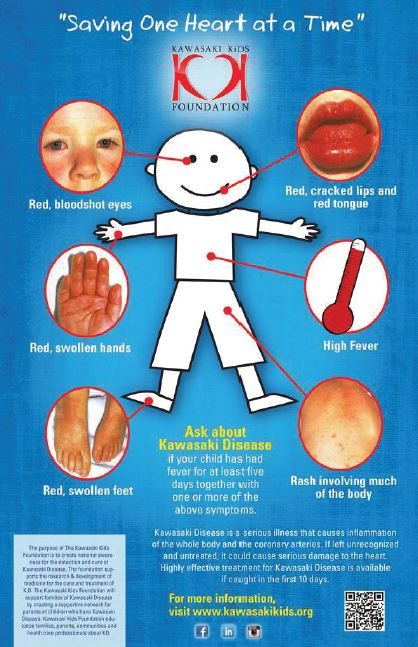 hope she gets well soon