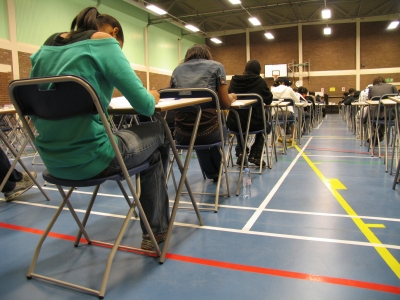 At the outset, let me say that, if I’m honest, I consider myself a pretty regular, laid-back, rounded sort of guy. I even like to think I’ve got things pretty sorted, however…

My last few years of being a dad have given me total humility regarding my parenting skills. With the experiences I’ve had I would never dare to tell other dads what to do. However, I hope some of this may help you…

This summer, my sons have done ‘A’ levels and GCSEs. At stake were a place at a prestigious university, and a sports scholarship to attend sixth form at a mega-expensive school, rather than the local comp. My oldest son is very conscientious, sensitive and organised and often we needed to tell him to stop work to go to bed, while no. 2 was cool-dude, sports-mad, party-king who had to be nagged, cajoled, bullied and encouraged to begin work and stop going out! We shed tears of anguish as no.1 was rejected from his dream choice of uni, and tears of frustration and stress from all the teenage issues we dealt with with no. 2. There was an occasion when I raced after him in my car, screeched to a halt, horn blaring, shouting loudly out of the window at him… and… not enough room here. This was not an isolated incident.

He and I are both easy-going, but tended to race to 100MPH when hitting certain issues, with plenty of shouting ensuing… too similar in character I think. Going from being his hero and friend to being seen as a dictator figure was tough sometimes. It can also be hard when friends have become more important to them than you.

A big clash came over his choice of girlfriend. We wanted to give him freedom and allow him to make his own choices as much as possible, but I tell you it’s hard, when you firmly believe that your son is making a bad choice. When do you say something? When do you suffer in silence?

Often it was easy to get cross without any major incidents having occurred. Just think of the mess, noise, sister-baiting, grunts, sloppiness, clothes, loud music, lack of energy and general selfishness of teenagers, and battles were never far away…(as I write this, my son goes out grunting and burping, but smiling!)

My wife and I were often exhausted through the emotional turmoil, and wondered if we were doing the right thing. Physical tiredness came from staying awake at night worrying about where they were and if they were ok. How do single parents survive…?

I also faced huge emotional turmoil at the thought of my oldest leaving home. After some years of working hard to find common interests, he has become a very close friend, and I have a pang of anguish every time I think of him not being around. It’s not just missing him, it’s also the guilt and remorse of things I’d done badly as a dad and, in terms of my life, wondering where the last 18 years have gone; have I made the most of them….?

It isn’t all hard! Being a dad has given me the greatest joy in life. We’ve had loads of laughs together too. When you love people so much, you naturally want to help them as best you can, to see them be successful and making the most of their opportunities. How do you do this? It’s hard, but here are a few thoughts:

Results Day GCSE exam results day is this Thursday (August 22nd) and by mid-morning our teens will know their results and whether they have made those all-important grades. Reformed GCSEs This is only the third year of reformed GCSEs in England so if you are still a...

Are Your Teenagers Getting Stressed Out by Exams?

Exam season is on us again! Watching your child sweat over exams can stress out the whole family so Dad.info asked Fegans’ Counsellor Vicky Bellman for her top parenting tips for helping with exam-related stress:     1. Keep It In Perspective Exams are...

The Best Family Walks in Britain

We could all do with exercise, fresh air and some lovely low-cost days out, not to mention some beautiful scenery. Charles Clinkard have put together a list of the 40 greatest walks for families in Britain, taking into account a number of helpful amenities such as...