DAD.info | Family | Kids | Children | Screen time: how much is healthy?

Screen time: how much is healthy?

The debate about how much TV kids should watch has raged ever more fiercely in recent years. As satellite dishes sprouted from the roofs of our homes, multichannel TV swept the land. Kids now have dozens of channels dedicated solely to them – like CBeebies for the tots, Disney and Nickelodeon for older children.

But in our increasingly hi-tech age, TV programmes are just one form of screen time for kids. Add in videos and DVDs, computer games, handheld game consoles, portable DVD players, laptops and computers, even the latest generation of video-playing iPods and you have a bewildering array of screens for our kids to stare at.

But does this really matter? What effect does all this screen time have on children? And, if excessive viewing has a harmful effect, how much can they safely watch? We spoke to psychologist Dr Aric Sigman, an expert on TV’s impact on children, to find out.

Is too much screen time harmful?

According to Dr Sigman, there’s clear evidence linking excessive screen time with a range of problems – from physical conditions like obesity to mental ones like ADHD (Attention-deficit hyperactivity disorder). He has pulled together all of the latest medical research on the effect of TV on children’s health, and came up with some alarming findings.

“There is a definite relationship between the amount of time kids spend watching screens per day and a range of physical, cognitive and educational problems later on,” he says. “These include severe problems like ADHD and milder but still worrying damage to their ability to concentrate, their attention span and performance in school.”

Supporting my child’s education: what can I do?

But we watched TV as kids – and we’re OK

The problem with today’s TV is that it’s a completely different medium than the one we watched after school. Programmes like Bagpuss or Ivor the Engine were much slower-paced, with a single narrator, blander colours and gentle soundtracks.

The programmes made for today’s children are bright, garish and noisy, with lots of zooms and fast-paced editing. Dr Sigman claims that these fast-moving images have a profound effect on children’s brains.

“It’s important to understand that the TV kids watch now is completely different from the shows we watched,” he says. “For example, editing speeds have gone up tremendously – up to ten times faster in some shows. Young, growing brains that are exposed to these rapidly changing images are irreparably damaged.”

Is it more of a problem for younger children?

Yes, especially for children under three. That’s because the brains of very young children are like lumps of clay, growing and changing in response to what children experience.

In America, medical experts are so worried about the effect of TV on young brains that the American Academy of Pediatrics says children under two should not view any screen entertainment at all. And, according to Dr Sigman, that’s not just because American children’s TV is rubbish.

“We think this doesn’t apply to us, because British programmes are superior to American ones. The point is it’s nothing to do with the programmes themselves – it’s the very act of staring at a screen that does damage” he explains.

How about older ones? 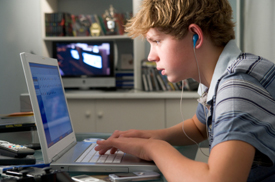 Although the effects are worse for younger children, research has shown that too much screen time is bad for kids of all ages. And older children are far more likely to have a TV and computer in their bedroom – this inevitably leads to more time spent glued to a screen.

“Kids with a TV in their bedroom are less likely to be able to read by the age of 6,” says Dr Sigman. “This is one reason Britain has such a poor literacy rate. Also, 37 per cent of British ten-year-olds play computer games for more than three hours a day – one of the highest rates in the world. This has a profound effect on their attention span, their ability to read and concentrate in school.”

How much is safe per day?

Children under three should never, or very rarely watch TV. If they do, it should be in the living room with the rest of the family – never in their own room. Older children should watch a maximum of two hours of TV a day – and channels like National Geographic are far better than those branded children’s TV.

“Just because something is called children’s television, don’t assume it’s better for your kids,” says Dr Sigman. “These claims are made by the people who produce the programmes, not by scientists. In fact, a Carry On film is probably better for your child than a lot of CBBC shows, because they lack the fast editing and bright colours that do all the damage.”

Of course, it’s hard to make kids live a perfect life; so a little common sense is necessary. For example, we all know sweets are harmful, but we let our kids eat them in moderation.

But it’s important to keep an eye on and ration your child’s consumption of media – be it TV, video games, the internet or DVDs – like you do sweets or fizzy drinks. Otherwise their mental and physical health might suffer in the long term.

For more information about the effect of TV on children read Dr Sigman’s book, Remotely Controlled: How Television is Damaging Our Lives, or visit his website.

The summer holidays have started in earnest, and in many households tempers have become frayed as the lockdown inevitably meant most children have already been at home for months. Even though things are easing currently it's useful to have a plan for when...

Starting school can be a shock to the system for many children, going from the relatively rule free, breezy environment of home life to a structured setting with hundreds of other children can be a scary experience. This is why a nursery may be worth the...

In these days of social media, children can already have a hard enough time fitting in. So how do we help a child through a loss and how can we encourage them to deal with their losses comfortably, confidently, and in a healthy way? Above all, how do we teach them not...