…Or walk. Or  scooter. There are so many reasons not to take the car 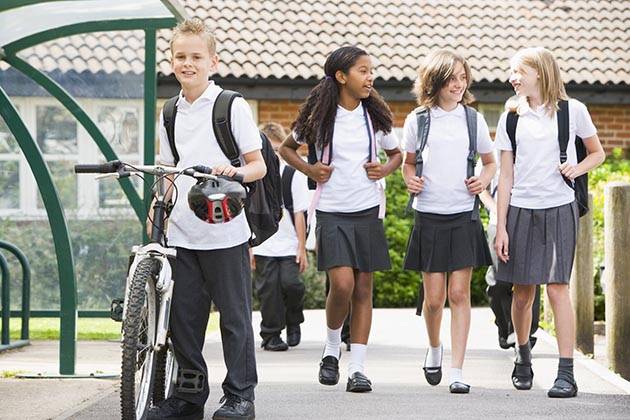 It’s Bike to School Week at the moment (5-9 June 2017). Organised by the charity Sustrans, it’s a week when children and parents are encouraged to ditch four wheels, and make their way to school on two wheels instead.

It makes so much sense for so many reasons. For example, did you know teachers say children who cycle, walk or scooter to school arrive more relaxed, more alert and more ready to start the school day than those who travel by car? Plus, it can save about £300 a year.

Cycling or walking to school sounds a bit of a no-brainer, really.

In fact, just being in a car can be unhealthier because the car you are travelling in is sitting in the fumes of the car in front. It sounds unbelievable but researchers say those in a vehicle can face up to three times as much pollution as those walking on the pavement just a couple of metres away.

So why aren’t more children cycling? According to Sustrans, about half of all children want to cycle to school but a tiny 4% are allowed to. In other words, it’s us parents who are stopping them from leading a healthier life!

Active travel – that is cycling, walking or scootering – was something most of us just did when we were children. When we were young, seven out of ten children walked to school. But over the last generation, things have changed. Now under half of primary school children walk to school. And that figure is decreasing year-on-year.

According to the charity Living Streets, the number one reason parents don’t like walking or cycling to school is they feel cars drive too quickly outside the school gates. Which is a little ironic given that a large proportion of cars on the roads in the morning are on the school run (one in five generally, but much higher near schools).

It’s also particularly sad when one discovers that almost all parents who do walk to school say it is one of the most important quality times they spend with their children.

That’s certainly true for me. Due to my working life, I can’t be there at pick up – and I find walking or cycling to school is full of laughs and golden moments. And if, as I am, you are able to take a route through a lovely park and avoid busy roads, it’s actually a calm start to the day. No, really! Getting to school can be a moment of relative zen (at least once we are all out of the house…).

Then there are those other days when I need the car after school drop-off to go to a meeting. I hate those days.

It’s hassle and stress from the moment we leave the house until I’m driving off again. And that feeling of stress doesn’t leave me until an hour or so later.

At which point I ask myself why on earth didn’t we just cycle or walk, with me nipping home afterwards to pick up the car? D’oh!

It’s clearly not just children who benefit from cycling or walking to school!