According to the NSPCC, 200,000 children have been sent or asked to send sexualised images online. You will have heard of Snapchat, Instagram, Messenger, Twitter but the NSPCC claims Twitch (a site Dad.info wasn’t aware of) has live streaming capacities that make it particularly suited to grooming.

Keeping up with the technology my kids are using is important to me so as I had no idea about Twitch there was only one way to find out. So today I switched on the live stream through their website. The first channel I selected seems broadly speaking ok (apart from the mindless screen violence). A self-deprecating mumbly American man playing Fortnite talking about his views on the World Cup and celebrities while he runs around as a female character with red bunches in a cloak stabbing and shooting other competitors. This channel though has, as I watch 19,000 other viewers and has been watched 97,641,565 times! He talks constantly, sharing details about his life and family as he responds to a constant chat stream. It seems dull to me but nothing to panic about.. Although, the channel owner seems to be dangerously obsessed by the game having played all weekend and claiming to have lost his mind. Time to move to another channel. 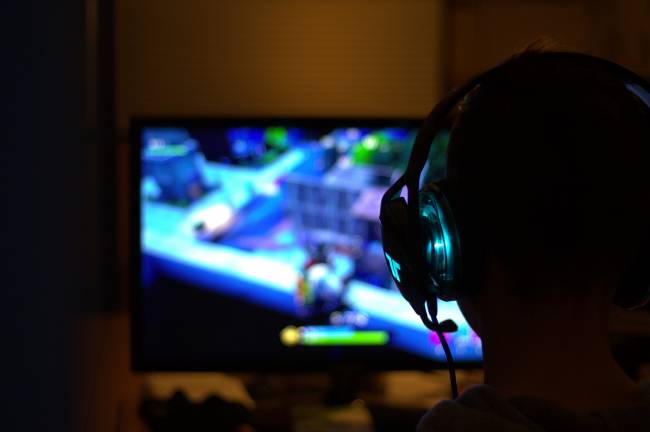 Next I try a Fifa channel. On this channel the owner lets you see his face. He is from the North of England and is football mad. When I tuned in, he is furiously engaging in the football transfer window, buying players for his fictional teams with the same obsessiveness as a real-life premiership manager. His language isn’t great, enough to make my Granny blush, but he has 1900 people watching right now as he switches fast between menus. Again, for me, time to move on.

The Twitch website is broken down into sub categories. Fortnite, Just Chatting, Overwatch, Minecraft and more. Channel owners are from all over the world, Korean, Chinese, English, French, Russian. I click into the Just Chatting section. I suddenly feel more nervous. The thumbnails here are now mainly of young women. Some underdressed, some lying on their beds. My curiosity about the site is strong but there are thumbnails here that suggest if I click on them I am going to see and hear things I can’t unsee.

I click on the most innocuous thumbnail I can find. A white chap ostensibly talking about Wolfenstein is actually telling a story about when someone filmed someone else in a public toilet. He is saying it is just human nature, wanting to see everything. He then goes on to talk about an experiment, a 24 hour stream of him doing stuff round the house. His only caveat that there is no camera on him using the bathroom. He talks about forgetting the camera is on and masturbation. Thankfully, for me it is just chat no images. Still not a topic I would want teens to tune in to. His stream will last 5 hours, but he only has 27 viewers. Tentatively I click on a young Russian woman’s channel there are two women just chatting. Relieved… I think I will leave it there.

Twitch is an amazing piece of technology. An opportunity to hear and interact with real young people from all over the globe. I would be delighted for my family to be given the opportunity to see in to the lives of teenagers from all cultures, but, and for me it is a complete obstacle, the content is unfiltered and the industry is unregulated. As an adult, just looking to understand what Twitch is, I have had to stop. I can’t take the risk of seeing imagery that would make me feel uncomfortable. If I unintentionally ended up watching pornographic content which involves underage people I would be breaking the law. There is no way of being sure what content I will see on any channel and the act of watching child pornography is illegal. On sites like this I am not sure how a parent could oversee what content, themes and ideas your child sees? Let’s hope Twitch’s head-office listens to parents’ concerns. For too long too many social media sites have been too cavalier about putting children at risk. So be warned and be careful.

Five of the best family-friendly games of 2015

Perfect titles for some last-minute Christmas present shopping The shelves of high street video game shops are dominated by big-budget shooters - with the likes of Just Cause 3, Fallout 4 and Call of Duty: Black Ops III top of many teenagers' wishlists this Christmas....

How video games can connect dads and children

Family video-game expert, Andy Robertson, reveals the bonding power of video games... Finding hobbies to share with your children is a great way to connect. Going for a bike ride, heading out of town for some wild camping, or even just gardening together are all great...