Activision starts from scratch with its rhythm action series

Get ready to grab hold of your plastic guitar once again: Guitar Hero is making a comeback.

After a five year hiatus, Activision is set to reboot its rhythm-action series with Guitar Hero Live. The seventh main console game in the series, it will launch on X360, Wii U, PS3, Xbox One, PS4 and mobile in autumn of 2015.

This time there’s more than just some updated graphics and a bunch of new songs. Guitar Hero Live makes two major changes to the familiar Guitar Hero gameplay. Firstly, it’s based around filmed footage rather than cartoony graphics, with the idea that you should really feel part of the action.

Secondly, the guitar peripheral has changed substantially; a change that’s intended to make gameplay feel more ‘real’ than before, as well as making it significantly different to previous Guitar Hero titles.

The game trailer and newly released screenshots show a game that looks totally different to earlier iterations of Guitar Hero. This time the game is played from the perspective of the guitarist, so you’re looking at your bandmates and – most particularly – the crowd.

Play well and it will be smiles, cheers and whooping all round. Hit some bum notes and the cheers will turn to boos and you’ll find yourself facing a hail of plastic pint glasses.

As you progress through the game, you’ll play progressively bigger venues, eventually getting the buzz of turning out in front of a packed festival. All of this is presented as real filmed footage, seen through your eyes as the band’s lead guitarist. 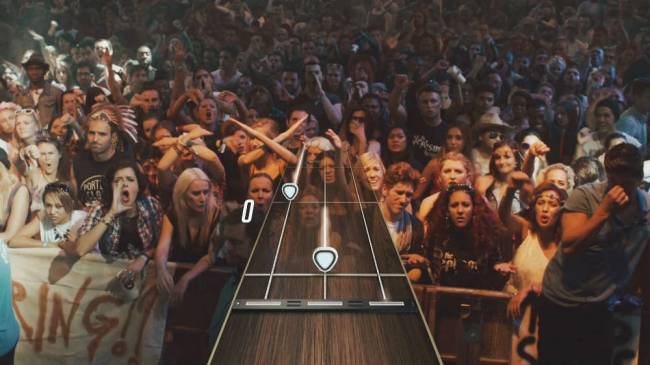 Getting good at the game will mean learning to handle a newly designed axe. Instead of five coloured keys laid out in a row down the neck of the guitar, the new controller has six buttons laid out in two rows of three. The top row are black keys, the bottom row white and so gameplay is now based around the position of the keys rather than the colour.

The refined button positioning is intended to mean your fingers moving in a more realistic guitar-playing manner than before, with your fingerwork similar to playing chords on a real guitar. In beginner mode, one set of the three keys is disabled, so you can perfect your tunes with some simpler fretwork.

Outside of the ‘live’ single-player campaign mode, there’s also GHTV, a 24-hour playable music video network where you can play along with official videos. GHTV is where Guitar Hero’s multiplayer element is found – here you can play against your friends or go online to play against remote opponents. Activision says the content of GHTV will be constantly updated, making it a place to discover new music as well as playing familiar tunes.

The setlist for the game is yet to be announced, but Activision says the game will include a range of musical styles, including dance music, folk, hip-hop, country and pop alongside rock. Artists confirmed as contributing songs include Fall Out Boy, My Chemical Romance, The Killers, Skrillex, The Rolling Stones, The Black Keys, The War On Drugs and Blitz Kids.

Guitar Hero Live is being developed by FreeStyleGames, the team behind Activision’s Guitar Hero spin-offs DJ Hero and DJ Hero 2.